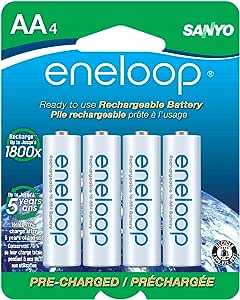 Visit the eneloop Store
4.6 out of 5 stars 8,648 ratings
| 469 answered questions
Available from these sellers.

The new SEC-HR3U4BPN 4-AA eneloop battery pack utilizes SANYO뭩 advanced rechargeable battery technology allowing them to be recharged up to 1500 times, 33% more than any eneloop battery!

They deliver excellent power performance. They come pre-charged and can be used immediately out of the package. These eneloop cells also have increased storage life and better extreme temperature performance than the original eneloop batteries.

ENELOOP...CLEAN ENERGY FROM THE FACTORY TO YOUR DEVICE

SANYO’s "Clean Energy Loop" initiative has become a reality. All eneloop 1500 cycle and XX batteries are charged at the factory in Japan using power generated from solar energy.

The initial voltage level of a battery provides no indication of how long the battery will last or how much power it can deliver. Alkaline battery cells rapidly drop below 1.5V soon after they are put into use and the voltage continues to steadily decline over time.

Since alkaline cells are non-rechargeable, they must be discarded and then replaced. SANYO’s eneloop batteries deliver best-in-class Ni-MH high capacity power and are rechargeable up to 1500 times. Devices like cameras flash units and wireless game controllers can easily draw more than 1000mA of current; rapidly depleting alkaline batteries.

eneloop batteries maintain a consistently high voltage level keeping your devices operating for a longer period of time. When you use eneloop Ni-MH rechargeable batteries, you will realize that “1.2V” can indeed be better than “1.5V”.

WHY ARE ALKALINE BATTERIES 1.5V?

Regular disposable AA and AAA batteries are considered Primary Cells, and are most widely recognized as conventional “alkaline” batteries. There are two electrodes inside each cell; one is made of Zinc, known as the anode (the negative terminal) and the other is made of Manganese Dioxide, known as the cathode (the positive terminal). The electrodes are surrounded by an alkaline electrolyte, the chemical from which alkaline batteries get their name.

WHY ARE NI-MH RECHARGEABLE BATTERIES 1.2V? 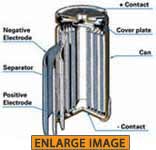 The chemical makeup of Ni-MH batteries eliminates the “memory effect”, which means the cells can be recharged at any time without having to be fully discharged.

The new SANYO eneloop battery incorporates a highly-durable super-lattice alloy which lessens the deterioration of this important alloy material. This super-lattice alloy increases the electrical capacity of the battery chemistry through lower internal resistance and delivers a long lasting, stable voltage output.

A new strong, thin outer case has also been added to the eneloop battery design in order to improve the internal cell space efficiency. The new case optimizes the balance of the components and when combined with other improvements have led to an increase in the number of times that eneloop batteries can be recharged.

Now let’s look at the annual cost of ownership in only the first few years and then extend it out to ten years (at that point, you probably won’t be playing on the same game system). It is quite obvious that eneloop more than pays for itself in just the first year of ownership!

RECHARGEABLE BATTERY POWER YOU CAN RELY ON WHEN YOU NEED IT MOST!

eneloop batteries deliver dependable power allowing you to maximize your music, gaming, computer, photography and other experiences. eneloop batteries can be used to power these and many more devices.

How to tell the difference between the 뱊ew 1500" and the 뱋riginal 1000?eneloop batteries

eneloop꿚HE BIRTH OF A NEW TECHNOLOGY

For more than 35 years, SANYO has been a leading manufacturer of battery technology. In 2005 SANYO set out to develop a new type of rechargeable battery that would literally change the way people live, work and play. The result was eneloop, a rechargeable battery created with a very simple idea in mind: provide a common energy source that can be reused over and over again. This 뱇ooping energy?became eneloop. Today, eneloop battery cells are recognized by millions of consumers worldwide as the industry뭩 premier rechargeable battery.

eneloop’s “signature features” include ready to use rechargeable power with the ability to maintain 75% of their charge for up to 3 years (when not in use), can be recharged up to 1500 times, they have no “memory effect” and outstanding performance even in extremely low temperatures (down to -4 degrees F).

Americans deposit 8 billion disposable batteries into landfills each year! eneloop batteries can be recharged up to 1,500 times, which means that the purchase and use of a single eneloop cell can keep many hundreds of batteries from entering landfills! They can also be recycled free of charge at any of the 50,000+ Rechargeable Battery Recycling Corporation (RBRC) recycling centers near you.

Page 1 of 1 Start overPage 1 of 1
This shopping feature will continue to load items when the Enter key is pressed. In order to navigate out of this carousel please use your heading shortcut key to navigate to the next or previous heading.
Back
Next
Pages with related products. See and discover other items: Juice Heads