Thomas the Rhymer and millions of other books are available for Amazon Kindle. Learn more 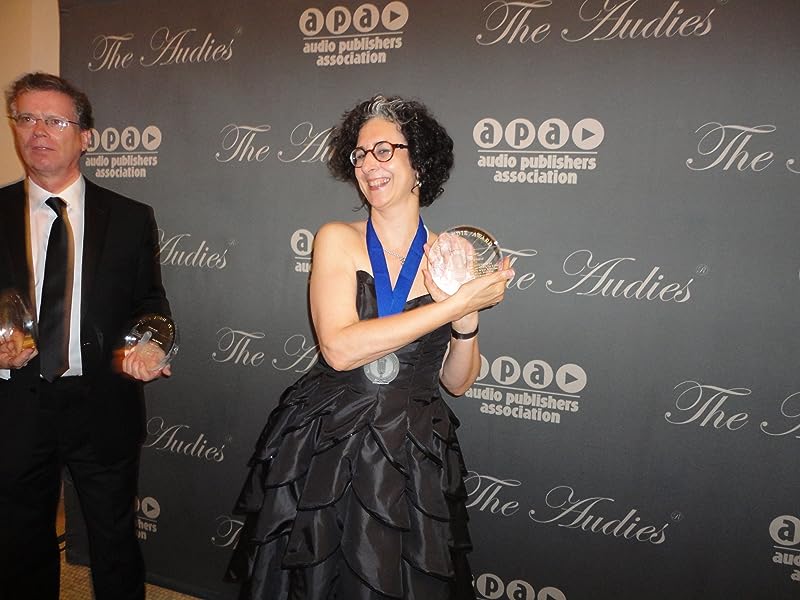 by Ellen Kushner (Author)
4.5 out of 5 stars 60 ratings
See all formats and editions
Sorry, there was a problem loading this page. Try again.

Start reading Thomas the Rhymer on your Kindle in under a minute.

After college, I wanted to be a writer, but there aren't any jobs like that, and I knew I'd be a lousy waitress because I'd drop things and be rude to people. Happily, I lucked into jobs as a fantasy editor for Jim Baen at Ace Books, and then got kidnapped by David G. Hartwell to work at Pocket/Simon & Schuster. I quit to write my first novel, Swordspoint, which took longer than I thought it would, so I supported myself writing Choose-Your-Own-Adventure (tm) books. But writing is a lonely business, and I love being onstage. So after I wrote my second novel, Thomas the Rhymer, I moved to Boston to become an announcer for WGBH public radio, later becoming the writer and host of PRI's national series Sound & Spirit.

During that time I wrote The Fall of the Kings with Delia Sherman, and pulled an old manuscript out of a drawer, something I'd started after Swordspoint, about Alec's teenage niece, and my agent said I should finish it, so I did. I call it TPOTS (pronounced "teapots"), but its real name is The Privilege of the Sword. About this time, it became clear I was writing all the Riverside novels out of order, a practice I continue to this day, as I am currently working with a bunch of friends on Tremontaine, a collective serial published by Serial Box online, and SAGA Press in dead tree format.

I love reading my own work aloud, and have been hideously indulged by "Neil Gaiman Presents" & producer SueMedia, who allowed me to read all 3 Riverside novels into a microphone for Audible.

I am proud to have been one of the original writers on Terri Windling’s shared world "Bordertown" series, so I convinced Holly Black recently to co-edit Welcome to Bordertown, inviting younger writers who grew up with the series to join some of us old-timers on the Border where Elves on Motorbikes is pretty common. I sometimes teach creative writing at Clarion, the Odyssey Workshop, and Hollins University’s Children’s Literature summer M.F.A. program, where students say I do not coddle them, but I do bring them Turkish Delight, so that's OK.

I now live in New York City with my wife, the writer, teacher, editor & best friend Delia Sherman. We have no cats, just plane tickets and theater stubs.

J Laurence Sarno
5.0 out of 5 stars A fantasy classic
Reviewed in the United States on February 12, 2020
Verified Purchase
Kushner takes one of the most basic Celtic myths -- the human taken into the land of Faerie -- and fashions it around the life of an historical figure, Thomas the Rhymer. She tells the story from many perspectives to give the myth weight, a sense of time and place, and most of all, an understanding of why the story has endured. Rarely, a fantasy novel earns the right to be called "classic"; this one does.
Read more
One person found this helpful
Helpful
Report abuse

Furio
2.0 out of 5 stars a wonderfully written bore
Reviewed in the United States on March 20, 2005
Verified Purchase
I sincerely envy Ms Kushner's writing skills: she is a wondrous writer, she handles her language with a subtlety unheard of and still she manages to avoid any overwriting or mannerism.

This story, though, is far from great. Some reviewers say it is true to the legend: should it be really so, part of the problem might lie in the original plot and yet the author could have done something to amend that.
Be it as it may, her characters are exceptionally dull -except for the elderly couple- and Elfland is lushiously boring, its beautiful queen being the worst of all.

C. M. Chang
4.0 out of 5 stars Wonderful
Reviewed in the United States on December 26, 2016
Verified Purchase
Retelling of a fairy tale told from three points of view. I loved all the voices and was drawn into their minds because they were such interesting and big-hearted people. If you like fantasy I highly recommend it. Any of this author's novels.
Read more
Helpful
Report abuse

Michael Norrish
4.0 out of 5 stars Very good
Reviewed in the United States on October 20, 2017
Verified Purchase
Very enjoyable read in four rather distinct sections (each told from the perspective of a different character). Not epic, which is something of a relief, but finely told. The long middle section about the stay in Fairie Land is atmospheric, but so too are the descriptions of regular, mundane medieval life.
Read more
Helpful
Report abuse

Book Lover for Life
4.0 out of 5 stars Nice classic story
Reviewed in the United States on February 8, 2017
Verified Purchase
Nice classic story. Very interesting read and a fun tale. If you like Irish history, its a good read. And if you don't, you should read more :)
Read more
Helpful
Report abuse

Dawn Earp
5.0 out of 5 stars A lovely tale
Reviewed in the United States on May 3, 2017
Verified Purchase
If you've only heard the story of Thomas the Rhymer referenced but not actually read his tale this a phenomenal telling.
Read more
Helpful
Report abuse

msbenkers
5.0 out of 5 stars Great magical story
Reviewed in the United States on April 18, 2018
Verified Purchase
Read this book when I was younger. Still remember it. I had checked out the book but finally bought it.
Read more
Helpful
Report abuse
See all reviews

Mrs. J. Proctor
5.0 out of 5 stars This is a book that I will definitely read more than once.
Reviewed in the United Kingdom on April 15, 2017
Verified Purchase
Thomas the Rhymer is a character who exists in ballads and folklore. He is taken by the Queen of the Elves to Elfinland and lives there for seven years.

Kushner has taken the traditional tale and given it her own twist and it works really well.

I loved this novel for many reasons. Firstly, I love the use of language. The language is not obviously archaic, nor is in rhyme or anything like that. Yet, there is a flavour to it that feels slightly apart from everyday English and part of a folk tale - without me being able to put a finger on how the writer has achieved this.

Secondly, I love the old couple who give Thomas shelter from the storm at the start of the novel. They are very much individual characters and very believable. They have no children of their own, and Thomas develops the habit of dropping by at irregular intervals, using them as a stable point in his wandering life. They welcome him, give him his share of the work to do, listen to his songs and stories and give him affection that has no conditions set upon it. (for a travelling harpist/singer, life is lived on the edge - people always want his music, but the rich in no way consider him an equal) They aren't fooled by his tall stories (Thomas has a habit of exaggerating his importance), nor do they fail to be aware of his womanising habits, but they also see his strengths.

Thomas comes to love a girl who lives not far from the old couple, but when offered the chance of sex with an elven queen, Thomas hesitates not. She takes him back with her and a curious relationship develops.

This is elfinland the way I feel it should be (I was reminded a little of Jonathan Strange and Mr Norell - though, of course, Thomas is the older book). Time is out of joint and humans can become very tired and drained. It can be beautiful and yet distorted. Nothing is as it seems and elven politics are complex and superficial all at once.

Kushner weaves another Child ballad into her narrative and it's likely that when you reach the end of the book you will be hitting You Tube to listen to Martin Carthy singing the song that Thomas writes in the book after encountering a human ghost in Elfinland.

Of course, being the teller of tall stories that he is, Thomas has real trouble getting anyone to believe him when he finally returns to human lands. He also has a gift from the Queen that is a bit of a mixed blessing...

This is a book that I will definitely be reading again.
Read more
2 people found this helpful
Report abuse

Dan Baines
5.0 out of 5 stars Beautifully written and surprisingly easy to read
Reviewed in the United Kingdom on August 24, 2012
Verified Purchase
I ordered this because I enjoyed 'Swordspoint' and 'The Privilege of the Sword'. This is a very different story, but the quality of the prose remains the same. The four different narrators are all equally able to pull you into their world and allow you to see the story from different points of view. I know I have read a lot of rubbish in this genre, and on that basis I sometimes overplay the quality of the better books. I don't think I've done so this time- it is the best book I have read for a very long time.
Read more
2 people found this helpful
Report abuse

Katie mac
4.0 out of 5 stars Scottish mythology
Reviewed in the United Kingdom on March 17, 2010
Verified Purchase
This is a beautifully written prose account of the Thomas the Rhymer poem based on the mythological Thomas. Very readable and informative, but essentially an interesting novel. No knowledge of the myth is needed to appreciate the story. For those who enjoy fantasy but are also quite down to earth.
Read more
2 people found this helpful
Report abuse

crmh99
4.0 out of 5 stars Wonderful fantasy read
Reviewed in Canada on February 7, 2018
Verified Purchase
Wonderful fantasy read, and a great retelling of a classic story. Had me totally hooked. It was an awesome book, would definitely recommend it and all other books by Kushner.
Read more
Report abuse
See all reviews
Back to top
Get to Know Us
Make Money with Us
Amazon Payment Products
Let Us Help You
EnglishChoose a language for shopping. United StatesChoose a country/region for shopping.
© 1996-2021, Amazon.com, Inc. or its affiliates