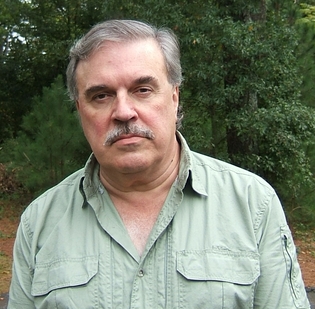 Jerry Ahern
Along with his wife, Sharon, Jerry Ahern was the author of over eighty internationally published novels, under the name Jerry Ahern, as well as the pseudonyms "Axel Kilgore" and "Red Mitchell." Jerry had written over a thousand magazine articles, columns, features and interviews. His latest non-fiction books are SURVIVE! THE DISASTER, CRISIS AND EMERGENCY HANDBOOK, THE GUN DIGEST GUIDE TO CONCEALED CARRY HANDGUNS and ARMED FOR PERSONAL DEFENSE. WRITTEN IN TIME, a fictional account of the Ahern family which was published by BAEN Books, the Aherns describe as "...a semi-autobiographical time travel science fiction steam punk western."

Information on Jerry can be found at www.jerryahern.com. If you're a fan of THE SURVIVALIST series, as so many people around the world seem to be, you'll be happy to know there's a growing Facebook Group dedicated to the series. Speaking Volumes (www.speakingvolumes.us) is re-releasing over sixty Ahern novels in print, in all the popular electronic formats and as audio books. New releases appear each month.

THE SURVIVALIST series has returned, picking up just minutes after the 29th book (#27, since two books were not numbered) ended. Published by Speaking Volumes and entitled THE INHERITORS OF EARTH, Jerry worked on the continuation of this series up to his death and Sharon and fellow writer Bob Anderson have picked up the mantle to keep this high adventure, soap opera aimed toward the future. Another new book in the series is set to follow.

Jerry and Sharon, high school sweethearts, were married for 43 years and have two grown children and five grand children.

Jerry Ahern passed away July 24, 2012. His family appreciates the many good wishes and kind thoughts from his many fans all over the world. He was a good man who loved his family and his country and always looked for the best in everyone.
Read more on Amazon's Jerry Ahern page
Back to top
Get to Know Us
Make Money with Us
Amazon Payment Products
Let Us Help You
EnglishChoose a language for shopping. United StatesChoose a country/region for shopping.