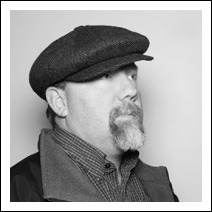 He discovered a knack for weaving tales quite by accident on Jan 2, 2010, and has been writing every day since. Becoming a novelist has changed his life.

As of September, 2015, Brian has written and published eleven novels and one non-fiction title.

His first novels were the books in the Henry Wood Detective series. After that, he wrote a thriller called A Touch to Die For and a YA titled Secret Doors: The Challenge. During this time he also maintained the blog that started it all, ExtremelyAverage.com.

One reader of the blog asked why he hadn't written anything more snarky, since there were often piles of snark in his blagh posts. Brian didn't have a good answer and so Arthur Byrne was born.

Arthur Byrne started out as the protagonist in Brian's first satire, Underwood, Scotch, and Wry. He became a pen name with the release of Killing Hemingway and later wrote the first trilogy in a new science fiction series, The Magellan Apocalypse. Arthur also writes a lot of the snarky newsletters because Brian just can't be bothered with such things.

Brian lives in a small town in Iowa, plays tennis and golf, and loves gathering data about his books. He's a data junkie. He is also a huge fan of guinea pigs.

Read more on Amazon's Brian D. Meeks page
Back to top
Get to Know Us
Make Money with Us
Amazon Payment Products
Let Us Help You
EnglishChoose a language for shopping. United StatesChoose a country/region for shopping.
© 1996-2021, Amazon.com, Inc. or its affiliates