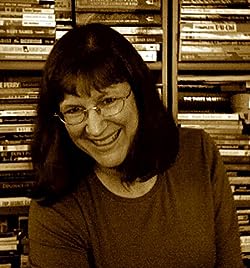 Holly Lisle has been writing fiction professionally since 1991, when she sold FIRE IN THE MIST, the novel that won the Compton Crook Award for best first novel. She has to date published more than thirty novels and more than twenty comprehensive writing courses.

Having finished up THE LONGVIEW CHRONICLES, she's taking a short break from Settled Space to finally write the third and final episode in the MOON & SUN series, THE EMERALD SUN.

Holly had an ideal childhood for a writer...which is to say, it was filled with foreign countries and exotic terrains, alien cultures, new languages, the occasional earthquake, flood, or civil war, and one story about a bear, which follows:

"Back when I was ten years old, my father and I had finished hunting ducks for our dinner and were walking across the tundra in Alaska toward the spot on the river where we'd tied our boat. We had a couple miles to go by boat to get back to the Moravian Children's Home, where we lived.

"It was getting dark, we could hear the thud, thud, thud of the generator across the tundra, and suddenly he stopped, pointed down to a pie-pan sized indentation in the tundra that was rapidly filling with water, and said, in a calm and steady voice, "That's a bear footprint. From the size of it, it's a grizzly. The fact that the track is filling with water right now means the bear's still around."

"Which got my attention, but not as much as what he said next.

" 'I don't have the gun with me that will kill a bear,' he told me. 'I just have the one that will make him angry. So if we see the bear, I'm going to shoot him so he'll attack me. I want you to run to the river, follow it to the boat, get the boat back home, and tell everyone what happened.'

"The rest of our walk was very quiet. He was, I'm sure, listening for the bear. I was doing my damnedest to make sure that I remembered where the boat was, how to get to it, how to start the pull-cord engine, and how to drive it back home, because I did not want to let him down.

"We were not eaten by a bear that night...but neither is that walk back from our hunt for supper a part of my life I'll ever forget.

"I keep that story in mind as I write. If what I'm putting on paper isn't at least as memorable as having a grizzly stalking my father and me across the tundra while I was carrying a bag of delicious-smelling ducks, it doesn't make my cut."