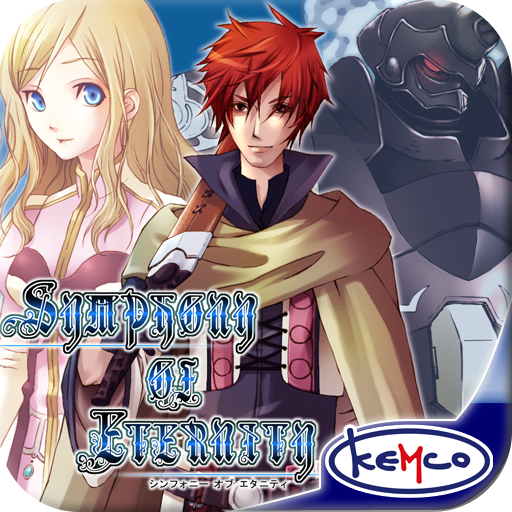 A young man and a golem traveling around the world seeking a legendary weapon, one day rescue a girl from an attack by monsters.
The girl tells them she is a royal princess, and that her family has been destroyed in a coup. She says she wants to travel together with them.
But where is the legendary weapon they seek?
This is the start of their journey, and of their intertwined destiny!

The quests of the hero ranging across the whole world, a coup in the kingdom… these are just some of the many events and interactions which make up this epic story.
There is an amazing outcome waiting for you, too!

The characters use many and various skills.
You can enjoy a variety of flashy and engaging battles.
The controls are simple and easy to learn, too!

If you like simplicity, you'll love the auto-battle system featured in this game.
Everything can be controlled smoothly from the touch screen.
Enjoy comfortable, stress-free play!

The game features high quality WVGA graphics, and also supports output to a high-definition monitor.
Immerse yourself in the beautifully-rendered world of the game.

'I want to be able to increase attack power', 'I like a character with staying power'... if this is how you feel, this game is for you.
You can nurture your character as you like, by allocating points however you want to.
Enjoy fostering your very own character with unique strengths!

（This app has generally been tested to work on any mobile device released in Japan. We cannot guarantee support on other devices.）

Logan Kay
3.0 out of 5 stars killing time+, dialogue - - -
Reviewed in the United States 🇺🇸 on November 3, 2011
Verified Purchase
first let me say, this is a great little tunrbased SNES style RPG, very similar the early FF series. power leveling is pretty good and i LOVE the Auto feature, which makes all of the charaters attack the same target with thier default melee attack until all the enemies are dead. its great if u just want to kill time and grow ur characters.

movement is a little irritating, inhave a physical keyboard on my droid 3, and the arrow keys come in handy at times. the on screen d-pad is all but useless do ive found its better to just disable it. using the touch cintrols is kind of a challence, since ur thumb/finger pretty much obscures the character. with the touch contils theres two ways of doing things. you can just touch your destination/target enemy and the character moves to that square or follows the selected enemy until it hits an obsacle (sp).

or you can sort of trace a path with your finger and this seems to work the best but thats where the problem of your finger covering up the charachter comes in.

Now we come to the dialogue.... the best thing i can say is that i have no idea WHATSOEVER as to what the over arching storyline of this game is. the reason being, the characters get into these conversations that have absolutely nothing to do with the plot. just talking for talkings sake but it also doesnt give u any character development either. im pretty sure the next dialogue i hear is going to be someone commenting on someone else's shoes.... yeah, its that bad. so i find myself skipping over the dialogue unless it seems really relevant and just looking for the next area to level up in.

so in short, if your looking for a fun little rpg that you can kill time with by grinding, heres a pretty good choice, but if you want something that is actually interesting with a good story, this isnt it, and unfortunately the world of cell phone rpgs still really isnt there.

im giving this 3 stars simply because i like grinding while im watvhing tv. other than that, you might as well play solitair, for all the back story your going to get, unless youre willing to wade though dialogue that sounds like it was written by a bunch of kids in the 3rd grade.
Read more
Helpful
Sending feedback...
Thank you for your feedback.
Sorry, we failed to record your vote. Please try again
Report abuse

E. Rainstein
4.0 out of 5 stars Memories of my childhood playing NES, Honest Review of an old school gamer.
Reviewed in the United States 🇺🇸 on October 13, 2011
Verified Purchase
I didn't think much when first buying this app, but I was sadly mistaken.

I thought "how good could a JRPG on Android possibly be?" It was good enough to have me pull out my old NES and disconnect my 360, to play some old school JRPG'S

The game focuses on three characters, 1 of which you are introduced to immediately but dont acquire until roughly 10 to 15 into the game. The character is a princess who's castle has been betrayed by it's own people. The game then takes you two the two main characters you start off with, one of which is a magical Golem. The two soon find the princess in trouble, save her, take her to the nearest town. There they learn about eachother, and about the main quest of the game. She decides to come with them on their journey and so they embark on an Epic Adventure that only a NES RPG theme styled game can tell.

The story is good, if your not expecting mind blowing, but a great story for a great rpg on Android.

The characters are not the same, and each have their own style of character, and personality which you learn about later on.

You get to actually assign each fighting style of the characters by books that you collect in the world. (Medic, Knight, Thief) Each one has different abilities, strengths, & weaknesses. Certain books can only be assigned to specific characters.

Leveling up is based on a merit point system, and skills must be carefully chosen if you plan on making it through the game.

As you progress through, fighting monsters you will earn gold which can buy you items, weapons, & armor. You also learn new abilities this way. Spells are cast using MP, which is a bar underneath your health.

All in all the game is great, you can change the control's from touch, to fixed keys, to movable keys, and this however is my only true problem with this great title. The control scheme is very frustrating at times, especially when trying to avoid or run away from monsters, or encounters when on low health and few items.

Even if you change the control scheme it doesn't matter because of how your character runs around to get there, in the end no matter how frustrating it got, touch was always the obvious and fastest way to move from danger even if it wasn't the most accurate.

However, I wasn't going to let a little control annoyance stop me from enjoying a fantastic game. This really brought me back to my childhood of playing all my favorite JRPG's on my Nintendo.

I just wanted to say Thank you, from a 30 year old, who forgot the old days of gaming.
Sometimes graphics, Multiplayer, and all the fancy stuff we have today doesn't fill the magic that you used to feel when playing a game. It doesn't come from graphics, or all the next gen devices, but it brings you to a magic place where you are happy. Thats all you care about. The fact that it's putting a smile on your face.

This is the best game I've played on Android so far. I hope the rest of you will enjoy it as much as I have. I hope this review helped. Thank you

Ang
5.0 out of 5 stars The best game ever what are you guys saying?
Reviewed in the United Kingdom 🇬🇧 on August 31, 2013
Verified Purchase
This is the best game ever, it is a very short introduction (good) and it was once free so why are you complaining? I'm into the Crystal of Water and can't get past it as you have to defeat 2 25,000 HP enemies. Should be able to save in between and this game is so addictive. Tip for players with no patience: Come on, admit it everyone feels the same way when you Completely Defeated but take a break and try to defeat the boss again. I did this and got all the way to the Water Element. I'm still going on now.
Read more
3 people found this helpful
Report abuse

Moi :)
5.0 out of 5 stars Proper Old School JRPG
Reviewed in the United Kingdom 🇬🇧 on June 17, 2013
Verified Purchase
Got this off of here and loving it. It's cute, fun, and quirky and very addictive.
Reminds me a lot of very much older games and as a piece of retro gaming it, I think, succeeds on many levels.
It's got all the things one should look for in a JRPG and it's a great time-waster, what more can you ask for?
Give it a go!
Read more
One person found this helpful
Report abuse

Marcus Coulson
5.0 out of 5 stars enjoyable old school Rpg
Reviewed in the United Kingdom 🇬🇧 on June 16, 2013
Verified Purchase
As a few have said there are lots of random battles but you can avoid them if you want to. The story kept me hooked right to the end and the eight playable characters were each unique. Give it a go... if you like old school rpgs then this is for you.
Read more
One person found this helpful
Report abuse

I. P. Abbott
5.0 out of 5 stars A modern day classic
Reviewed in the United Kingdom 🇬🇧 on February 10, 2014
Verified Purchase
Great gameplay, hours of fun, plenty of side quests, and collectibles.

Did beome a little repetative towards the end, but overall I loved it
Read more
Report abuse

avidbuyer
3.0 out of 5 stars SY OF ETER
Reviewed in the United Kingdom 🇬🇧 on July 31, 2013
Verified Purchase
not used a lot but looks good and will be using it in the future and rewriting this review in full
Read more
Report abuse
See all reviews
Amazon Appstore Return Policy