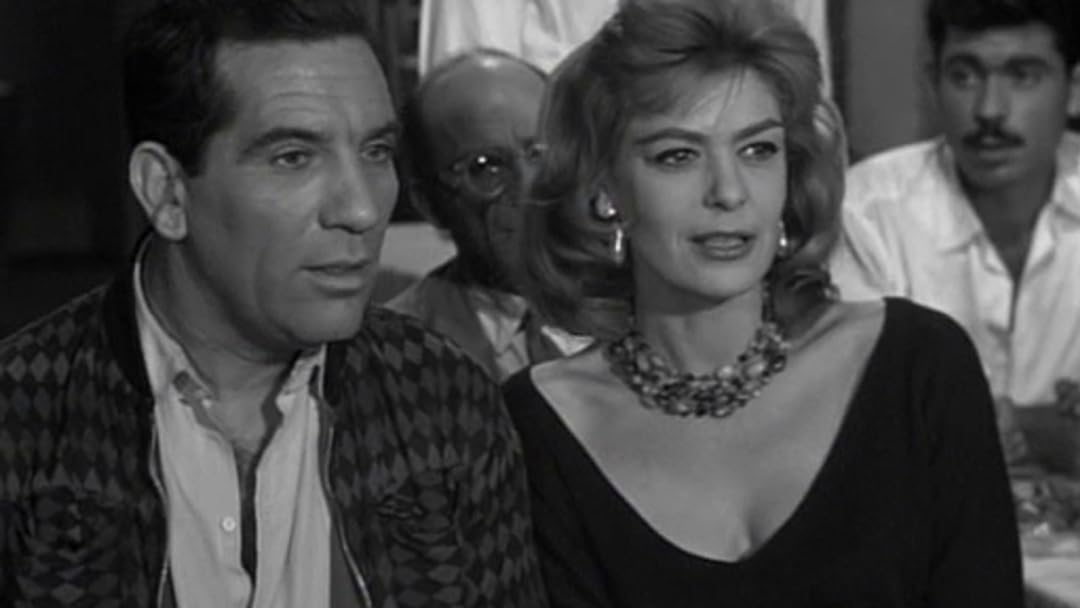 (230)
7.31 h 32 min19607+
Melina Mercouri stars as a beautiful Greek prostitute pursued by every able-bodied man in town as well as an American philosopher who tries to educate and reform her.

Robert KohanReviewed in the United States on September 23, 2022
5.0 out of 5 stars
A wonderful
Verified purchase
A wonderful celebration of the Greek spirit.

Jack E. LevicReviewed in the United States on March 28, 2013
4.0 out of 5 stars
A FREE-SPIRITED WOMAN IN A CAREFREE GREECE
Verified purchase
The lovely Melina Mercouri won the Cannes Film Festival Best Actress Award for her portrayal of fiercely independent but delightful Illia. The men of her Greek harbor town adore her free-spirited and fun-loving nature. Her carefree world is about to change thanks to a bookish American named Homer (Jules Dassin). Homer is in Greece to find the meaning of life and to understand why the glorious Greek culture of ancient time came crashing to an end.

Illia becomes his muse and inspiration. You see, Illia is a "working girl" and in Homer's eyes, it's women like Illia and her clients that brought the ancient Greek culture to an end. The premise is a bit silly but interesting as Homer tries to break Illia and make her an "honest" woman. He asks for just two weeks to transform her, yet does Illia need a make-over? She is kind and free-spirited and loves life. She loves to watch plays of ancient Greek Tragedies where everyone is good and there is always a happy ending with a visit to the seashore. Such gentle innocence upsets Homer and he vows to set her straight on all levels. No surprise that it is really Homer who needs a lesson on life.

NEVER ON SUNDAY gives an idyllic look at Greek life in 1960. The modern world is encroaching on the sleepy harbor town yet the simple joys of Greek life centering around ouzo and dancing still dominate the town. The more glasses a dancing Greek man breaks in a tavern the happier he is. It's a simplified version of life but fun. "Mr. No Face" is the bad guy in town. All the "working girls" live in the apartments he owns and pay excessive rent. Only Illia is free-spirited enough to evade his control. Homer innocently joins forces with Mr. No Face to break Illia of her lively ways.

The other working girls look up to Illia and admire her. She can influence them to break free of Mr. No Face's control. I enjoyed the scenes of 4 girls walking arm in arm but seen pretty much from the waist down--tight 60's knee length skirts, high heels and a determined brisk walk. They are seen walking on several occasions and an attractive voluptuous woman is their spokesperson to Illia. I wish we had seen more of her.

NEVER ON SUNDAY does not fully hold up to the test of time. It seems somewhat dated and rather tame by today's standards. The DVD included the original theatrical trailer where the announcer says he can't say what Illia does for a living but you can guess. It must have caused a bit of stir in 1960. I knew the NEVER ON SUNDAY song was famous so when Mercouri sings it I expected more life and enthusiasm. It's a memorable song but weakly performed.

NEVER ON SUNDAY is a fun movie and a step back in time. It's worth watching to imagine the world in 1960.

MAWReviewed in the United States on October 30, 2022
3.0 out of 5 stars
Incomplete Video
Verified purchase
n/a

Khristine JacksonReviewed in the United States on April 2, 2021
4.0 out of 5 stars
Jules Dassin 12-18-1911//03-31-2008
Verified purchase
I love this movie ... I saw bits of it decades ago... I'm happy it is on Amazon Prime. Forget the negative review's.. Yes the movie is from 1960 and most people born after 1990. Are simply clue-less to look down on it. Because their petty lives revolve "cellphone's,Video game's,Instagram" and just plain rude behavior. Movie that were made during the studio system days were ground breaking. The director's of those decades had no map.. or instruction's. They were "Risk Taker's".. they Created, Composed and Channeled an energy.. that many young film maker's . Can only wish that they could direct film's like these ..! The late Jules Dassin was one of a kind .. He was married twice... he was "Black-listed in Hollywood".. in the 1950's. .. he had three children. A son named Joe who was a popular French singer in the 1970's and two daughter's.. He (Joe) died from a Heart attack in 1980 at the age of 41.. All of his movie's were game changer's. His won several award's in Europe .. I could go on and rave but ..you must watch his film's and see what all the fuss was about...
10 people found this helpful

David M. GoldbergReviewed in the United States on November 18, 2010
5.0 out of 5 stars
Beware of Americans Bearing Gifts to Greeks
Verified purchase
This is one of the ultimate feel-good movies of all time. There are many reasons why. Melina Mercouri's charismatic performance is paramount. Close behind is the infectious musical score that it is hard to get out of your head, and who would want to? It is important that in a film that explores the nature of love, all of the contributors should love making the film, and this sentiment shines through every frame, even with the bad guys.

Dassin's manifold roles are harder to evaluate. He seems to have claimed the credit for writing the script that was apparently an original screenplay, and if so, he deserves high marks. As in most comedies with a serious intent, there are awkward and artificially-injected devices to help out the plot, such as the showering of gifts by the Ugly American upon the Greek Goddess using money from a gangster-pimp that she detests, and that causes their budding romance to blow up in his face; but overall there is as much genuine wit as in an average Woody Allen movie, and the characters as a whole are much more likeable than Woody's typical brood. Even without the benefit of colour, the settings with the sea and sunshine transport the viewer into an idylically magical world ( that unfortunately, does not really exist, least of all in modern Greece that for many decades has practised a rapacious and self-indulgent code in its treatment of tourists ). Still, the illusion is pleasant while it lasts. Dassin the director offers few of the stunning camera tricks he contrived in his earlier "Rififi", but there are a some visual gems, such as the 4 prostitutes with their 8 legs showing only from the waist downwards trotting briskly about their business. Dassin the actor is a real paradox. In "Rififi", this American communist plays an Italian safe-cracker and turns in an enormously convincing performance of a role he seems born to play. Here, he plays, well, an American communist and is as mis-cast as anyone could be in his own movie. Strange things happen when you don't have Joe McCarthy breathing down your neck.

All in all, this comedy ranks with such gems as "The Apartment" and "Some Like it Hot" as a throwback to a past era in the world of cinema that has moved beyond being dated to the realm of the classics. The visual and sound quality and the range of language and subtitle options are all very satisfactory. And so is the price of this MGM product.
One person found this helpful

Leah ChanaReviewed in the United States on May 21, 2022
5.0 out of 5 stars
Refreshing, Human, Happy, Empowering Film
Verified purchase
Here's what I love about this film:
1. It's timeless
2. It VALUES love
3. It shows women in power - in an organic, human way
4. It doesn't JUDGE sensuality
5. There's so much humanity in this

It's so refreshing to hear another language and have an option beyond American "shlock" and gratuitious violence spoon fed to audiences in the name of "sophistication".

I'm very picky about what I choose to watch. In these times, supporting happiness is ALL and EVER more important.
4 people found this helpful

Therese MalmbergReviewed in the United States on June 11, 2022
3.0 out of 5 stars
Packaging not what I expected
Verified purchase
I was quite surprised to see Chinese writing on the package, fortunately the disc did play on my player and was in English. However, there was no indication that this was tailored to a non-American audience.

burnettenReviewed in the United States on November 6, 2021
4.0 out of 5 stars
Iconic film hurt by poor digital copy
Verified purchase
Jules Dassin's archetypal film of the "joyous prostitute" with at least one wonderful performance (Melina Mercouri) and classic film score/song (Academy Award to Manos Hadjidakis). Unfortunately, the digital version being transmitted by Amazon has several long periods of blank red screens (film is in black-and-white), being very disruptive of the viewing experience.
See all reviews
Back to top
Get to Know Us
Make Money with Us
Amazon Payment Products
Let Us Help You
EnglishChoose a language for shopping. United StatesChoose a country/region for shopping.
© 1996-2022, Amazon.com, Inc. or its affiliates