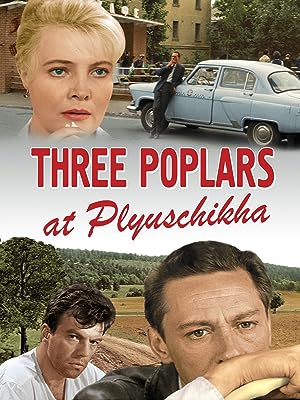 (44)
1 h 15 min201113+
This film is to Russians what "Casablanca" is to Americans - a Soviet cult classic. The almost but not quite love between a taxi driver and a married peasant woman won the hearts of Russian viewers. Inspired acting by Tatiana Doronina & Oleg Yefremov.

John P. Jones IIIReviewed in the United States on December 12, 2019
5.0 out of 5 stars
The Birch Trees and Casablanca…
Verified purchase
Admittedly, when I read the blurb that this was the Russian “Casablanca,” I decided it is a “must-see.” As one of the other reviewers indicated, this movie does not literally resemble “Casablanca,” even in the slightest. But metaphorically, as an essential cultural point of reference, it must. But not being Russian, I cannot say for sure. So, I watched this movie looking for points that might represent “Round up the usual suspects,” “Play it once, Sam, for old time’s sake,” “We’ll always have Paris,” and even the song “As Time Goes By,” all of which are in the American culture, though numerous Americans today might not realize their origin.

The director is Tatyana Lioznova. Amazon indicates a release date of 2011. But the movie has a copyright from 1968, when it must have been produced. There are very few cars of the wide boulevards of Moscow, and those are of ancient vintage, mainly taxis. The two leading actors are Tatyana Doronina who plays the part of Russian peasant, Nyura, from a small village along the Oka River, 300 km east of Moscow. Oleg Yefremov plays the part of the taxi driver, Sasha, in Moscow. The devastating earthquake in Tashkent, which occurred in 1966, is a point of reference. “The Great Patriot War,” (World War II) still reverberates. Nyura’s uncle, who drives the horse-drawn wagon, has only one arm, and two other sons were lost in the war, all of which occurred in different countries. Sasha, the taxi driver, lost his relatives in the Leningrad blockade. It is twenty plus years on now, so these points are made only in passing.

The birch trees are quintessentially Russian. The movie “Dr. Zhivago” commences with them, as does “Three Poplars in Plyuschikha.” One of my “lifetime achievements,” a goal I set in 1965 after seeing Dr. Z, and realized a quarter century later, was to picnic in a birch grove, of my own choosing, along the side of the road, watch the wheat fields and the kids kicking the soccer ball, though that particular grove was actually in the Ukraine.

Russia, much like France, has the deep-rooted concept of “La France Profonde,” that the “real” France is represented by the “peasants” of the rural areas. They even literally said that in Dr. Z: “Scratch a Russian and you will find a peasant.” So, “Three Poplars…” is filled with the subtleties of the rural/urban interface. When Nyura gets to the railway station for her trip to “the big city,” the first thing she does is change out of her flat shoes for the ones with two inch heels to prove that she is not “a peasant.” And once in Moscow, she is very careful in observing the latest styles, and adjusts her sleeve, to wear it as the city women do. Alcoholism, and the lack of same (Nyura’s husband is shunned in the village because he does not drink), like the birch trees, has to be an integral part of any Russian movie.

I strongly suspect that many a Russian male suitor has made the following promise to his bride-to-be, as was done in the movie: “I’ll built you a lovely house, you can walk barefoot in winter.” Ah, what a great come-on line. One touchstone from the movie that I had completely forgotten about: Russian drivers, in the days of the old Soviet Union, routinely kept their windshield wipers inside the car, putting them on the windshield only when it commenced to rain. Due to shortages, the wipers were frequently stolen. And I learned that the equivalent of “As Time Goes By” must be “Tenderness,” referenced (and sung) a couple of times.

The set-up is obvious. Did Nyura decide to have a big-city “fling” with Sasha? Though at times a bit slow moving, I’d recommend watching this movie to find out and give it 5-stars, for including the birch trees, the windshield wipers and Tenderness. The ‘60’s, in the Soviet Union, as time goes by.

mtb designerReviewed in the United States on June 23, 2019
5.0 out of 5 stars
I hope you'll enjoy watching this movie as much as we did
Verified purchase
For your enhanced understanding of this film:
-The cabbie is an orphan due to Leningrad blockade. Known as Siege of Leningrad to Americans. Over 1 million were starved and bombed to death.
-The first passenger is likely related or a friend of someone of wealth and importance, judging by where she is dropped off, one of the loftiest neighborhoods in Moscow.
-Muscovites had few cars during this time. Public transportation was and still is superlative, an extensive system of subway, buses, minibuses, and cabs took care of everything.
-The pictures on the mirror are of popular actors and comedians.
4 people found this helpful

unclemymyReviewed in the United States on February 6, 2017
5.0 out of 5 stars
Russia's "Casablanca"
Verified purchase
I saw the movie described as Russia's "Casablanca", and decided to give it a look. While it doesn't involve the elements of international intrigue that you can find in Bogie's classic, the undercurrent of soul-stirring romance is eloquently rendered in a way that is not diminished at all by subtitles. I especially enjoyed the portrayal of both city and village life during this interesting period of the former Soviet Union. The courage and strength of heart displayed the by lead character, Nyurka, came through beautifully. Tatyana Doronina would surely have won an Academy Award for her heart-tickling innocence, had this been a product of USA. If you've ever had to find the proper place for adventurous romance among the elements of your everyday life, you will surely see yourself in this movie. And if you've ever had to bear disappointment that an exciting opportunity just didn't happen, then you will surely see yourself driving a taxi in this movie!
7 people found this helpful

Courageous CroissantReviewed in the United States on June 26, 2015
5.0 out of 5 stars
Heartbreaking and moving...
Verified purchase
Comparing the movie to "Casablanca" seems ludicrous to me. A potential love story that goes nowhere, "Casablanca" does not hold monopoly on that. This film is a bird of a different feather.
The heroine is a gentle soul, radiant, filled with light and love, completely misunderstood by her cold and unfeeling husband, ridiculed by her own daughter, laughed at by other villagers. She is lucky that she does not realize how bad she had it. Perhaps she does, but she chooses not to dwell on it. And one fateful trip changes everything for her. It is impossible to imagine the quiet desperation that will follow this trip. But her eyes have been opened, and there is no going back.
16 people found this helpful

RGreerReviewed in the United States on July 19, 2019
4.0 out of 5 stars
Intriging film
Verified purchase
I'm not crazy about the ending but I loved the acting, the story line, the desaturated look and colors, and getting to see Russia in the '60s.
3 people found this helpful

GuruReviewed in the United States on May 2, 2019
5.0 out of 5 stars
Very well directed and acted film.
Verified purchase
Hollywood doesn’t make this kind of film anymore. Very well directed and acted film. When there is a lack of feelings between a married couple, people can search for love and romance. From a different person. A nice film to watch.
3 people found this helpful

BanesyReviewed in the United States on December 3, 2019
5.0 out of 5 stars
Charming Classic! Alas, Colorized Version
Verified purchase
This is a touching small film from Soviet Russia that was popular in its day, for clear reasons. This is the colorized version of the film. I would enjoy seeing it in its original version. Also, one or two of the subtitles here could be improved.
One person found this helpful

MaryiaReviewed in the United States on January 14, 2018
5.0 out of 5 stars
Five Stars
Verified purchase
It's a very deep story
4 people found this helpful
See all reviews
Back to top
Get to Know Us
Make Money with Us
Amazon Payment Products
Let Us Help You
EnglishChoose a language for shopping. United StatesChoose a country/region for shopping.
© 1996-2021, Amazon.com, Inc. or its affiliates