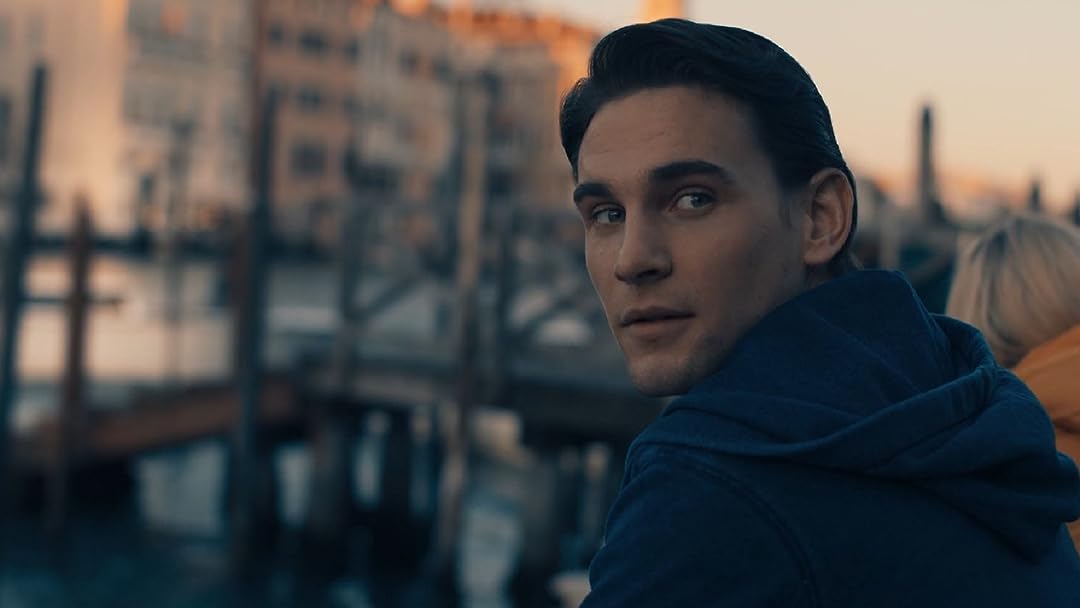 A Discovery of Witches

(13,083)
7.92019X-Ray16+
Escape into a tale of forbidden love and ancient magic, set in a world where witches, vampires, and daemons live amongst us... hiding in plain sight. Based on the best-selling All Souls Trilogy by Deborah Harkness.

H. BalaReviewed in the United States on August 11, 2019
4.0 out of 5 stars
"The library's busy today. Quite a few witches here."
Verified purchase
I dunno if I could be lured to read Deborah Harkness' best-selling All Souls trilogy. I'm not so keen to dive into dense, gothic world-building and myth-making. Right now, I'm in a phase where my reading preference lines up more with post-apocalyptic survival novels. So, maybe another time.

Having said that, I did just binge-watch A Discovery of Witches, an eight-episode arc that had collected digital dust in my DVR purgatory. Frankly, I'd recorded the show only because I have a mad crush on Teresa Palmer.

She plays Dr. Diana Bishop, an American historian and reluctant witch. She's our eyes into an uneasy supernatural society what's composed primarily of demons, vampires, and witches (they refer to themselves as "creatures"). The series opens with Diana's arriving at the venerable Oxford university. She's a visiting research fellow come to Oxford to give a lecture. Not that she's a stranger here. Diana took her DPhil in history of science at Oxford, after which she wrote two prize-winning books, after which she was awarded tenure at Yale, one of the youngest ever to be accorded such honor.

But that's just surface gloss. To get to the bones of Diana Bishop, you must know that she's not comfortable around magic, not since her parents' passing all those years ago. As it were, she exhibits scant control over her witchcraft.

So, it's all the more shocking when - oh, and I should drop a ***plot spoiler alert*** here - Diana, while conducting research in Oxford's Bodleian Library, (unwittingly) retrieved the legendary Ashmole 782, a long-vanished, feverishly sought-after alchemical manuscript that is rumored to explain the origins of the supernatural creatures.

Ah, the furor triggered by Diana's activity. No way could she remain oblivious to the occult doings around her, not when all manner of creatures have become suddenly keen on her and on the manuscript, purported to contain the witches' first spells, including the spell that created vampires. No wonder everyone wants it.

As mentioned, this is rich, dense world-building. If you need a fix after Game of Thrones done left ya, then maybe A Discovery of Witches'll do. Same elaborate plotting. Labyrinthine creature politics. A lush, forbidden, gothic romance. Okay, it's a bit sparse in the fighty fight department. But there is a haunted house. It has a personality.

"Time to take a big step into the mysterious. Pick up one foot and travel," she's told. It's Diana Bishop's journey all the way as she comes into her power, as she runs into that formidable geneticist and biochemist and 1500-year-old vampire, Dr. Matthew Clairmont (Matthew Goode). Theirs is at times an uncertain relationship that, nevertheless, is guaranteed to make da ladies swoon and catch the vapors and such.

Swoony romance aside, something's gone screwy with the creatures. The witches are losing their powers. Vampires are failing to sire. Demons are suiciding, have mental health problems, and demon homelessness is on the rise. In the face of man's technology, creatures are becoming extinct. It's believed that the Ashmole 782 can deliver a cure.

Into this snake pit of politely warring supernatural species steps Diana Bishop, at times guided by a brooding vampire desperate to understand the evolution of his kind. It's a role I'd never seen Teresa Palmer play before, and she rocks it as the reluctant witch and direct descendant of the first woman executed at the Salem witch trials. Matthew Goode is also really goode and is, to quote my girlfriend, quite a dish. Girl actually fanned herself, which was irritating.

If you'd read and liked Guillermo del Toro and Chuck Hogan's The Strain trilogy, there's similarity in that characters in A Discovery of Witches also take a scientific approach towards vampirism.

I get it that this show may not be for everyone's taste. It sets a leisurely pace. The story unfolds like a fever dream. Lots of backroom politics going on. There's the sterile backdrop of academia. But the acting's excellent. The cast breathes life - unlife? - into their characters. Props to Owen Teale who, as the dark magic practitioner, Peter Knox, is as repugnant as he was playing the venomous Lord Commander of the Night's Watch in GoT.

Parting thought. Even though Diana ultimately proves herself to be the brightest witch of her age, I'll still take Hermione Granger over her. Hermione is like the Batman of the wiccan community. Give her time to prepare and to think, and she can beat all comers.

Andie HockReviewed in the United States on September 24, 2022
5.0 out of 5 stars
Great Program!
Verified purchase
This program is amazing!

Amazon CustomerReviewed in the United States on July 4, 2022
5.0 out of 5 stars
Surprising good
Verified purchase
Very pleasantly surprised by how much I enjoyed this show. There is great chemistry between the main characters. Matthew Goode fiys his role very well and my God is so easy on the eyes. Teresa Palmer seems more in place in this role than I have seen her in other projects. Overall, it is a fun romp with vampires witches and demons without gore.
2 people found this helpful

gmichelleReviewed in the United States on March 19, 2021
5.0 out of 5 stars
Beautifully done.
Verified purchase
A Discovery of Witches is about a young historian who retrieves a mysterious alchemical manuscript (from the library at Oxford) that many secretive non-human entities have been seeking for centuries. They all seem to believe that it contains their species' origin stories, which will help stabilize the power structure of the supernatural world somehow. (I suppose it would be equivalent to humans searching for a book containing the meaning of life.) When Diana finds it, the creatures at the top of the hierarchy start doing anything and everything they can to get their hands on it, but Diana finds herself a persistent (and somewhat stalker-ish) ally in the vampire Matthew du Claremont - a relationship that has everyone clutching their pearls at THE AUDACITY, The Covenant blah blah. Very Twilight - if that series had much more interesting/intelligent characters and Bella wasn't completely useless. *No shade, I loved Twilight when I was younger.*

I read the All Souls books a few years ago and don't remember every little detail, so I wasn't bothered by any differences that exist. I wasn't sure about the casting for Matthew, but this actor did better than I expected. (Though he does get this constipated look on his face that made me laugh at inappropriate times.) Teresa Palmer is perfect as Diana. The magical aspects were done well, not over the top like many shows. I'm so excited for the next season and a peek into Elizabethan times.

Note: I purchased the digital HD version which obviously works just fine. Who even buys DVDs these days?
5 people found this helpful

Michelle LaCoutureReviewed in the United States on June 1, 2022
4.0 out of 5 stars
Not as good as the book
Verified purchase
I enjoyed the casting, but the book had much more detail the series left out.

Falling2311Reviewed in the United States on May 11, 2020
5.0 out of 5 stars
I like the differences
Verified purchase
I loved it so much, I couldn't wait for season 2 and bought the books. And then I stopped reading them. If you really like Diana in the books then I think you're not going to like her so much here. I found her anxiety to be very present in the books which isn't so much the case in the show. I think the differences in her character are best displayed by a single scene. There's a situation in the book where she just falls apart completely and needs Matthew to pull her together. When the same situation happens in the show, Matthew literally says 'Well, she's not falling apart.' So yeah, they're very different in some regard and, personally, I love the tv show Diana over the book's Diana. She's much more collected in the tv show.
So if you really love the Diana in the books, prepare yourself because that's not what you're getting.
My only complaint is with a few of the conflicts. You know how some people will have expected you to have followed their train of thought so they say something that only sort of makes sense? That happens a few times - the covenant and domenico scene in particular. The problem is the show changed why domenico shows up but kept Matthew's solution the same, which doesn't really fit because it doesn't address the original 'why'. Hopefully someone else picked up on that and told the writers. Other than that one tiny bit the show is wonderful and I can't wait for season 2 and 3.
4 people found this helpful

Bess HeitnerReviewed in the United States on March 14, 2022
3.0 out of 5 stars
Unanswered Questions for People who Also Read the Books
Verified purchase
I did watch the Twilight Series which was irritating and stupid. Alas, the books were unreadable and I threw them out,

2) To save Matthew's life she makes a promise to the Mother Crone Witch that she will do ANYTHING to save Matthew and the Crone Witch says You will Pay but in the TV series this never comes up again.

Love Matthew Goode and Lindsay Duncan but they've done much much better.

Bess Heitner
One person found this helpful
See all reviews
Back to top
Get to Know Us
Make Money with Us
Amazon Payment Products
Let Us Help You
EnglishChoose a language for shopping. United StatesChoose a country/region for shopping.
© 1996-2022, Amazon.com, Inc. or its affiliates