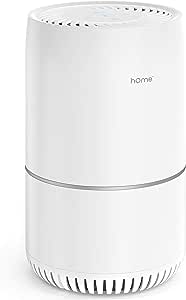 by hOmeLabs
4.6 out of 5 stars 1,349 ratings
Available at a lower price from other sellers that may not offer free Prime shipping.

4.6 out of 5 stars
4.6 out of 5
1,349 customer ratings
How does Amazon calculate star ratings?
Amazon calculates a product’s star ratings based on a machine learned model instead of a raw data average. The model takes into account factors including the age of a rating, whether the ratings are from verified purchasers, and factors that establish reviewer trustworthiness.

Mystifd
1.0 out of 5 stars Made air quality worse and concerns with EMF emissions and noise levels
Reviewed in the United States on December 4, 2019
Verified Purchase
I was really hopeful we had a winner here based on the all rave reviews, however I unfortunately found that not everything was on the up-&-up with this particular purifier and so I felt like I should share my experience (the good and bad).

Like many others, we found the unit itself to be well-packaged, aesthetically pleasing, seemingly well-built and easy to use. Based on the size, we found it was a perfect fit in our bedroom, placing our new larger Winix unit in our downstairs living area because it is obviously better suited for larger spaces.

Now, the not so good.

1) Noise quality: The first couple of days, the unit was barely audible on the lowest setting. After about a week, the hum on the lowest setting and other two settings had increased a bit. It's tolerable but just something else to point out just in case this may be an issue for others.

2) Air quality: By the second day and night of running it non-stop (started on highest setting the first day, then typically keeping it on medium setting during the day and on lowest setting during night), I noticed my throat did not feel right and not in a flu-ish way, it just felt a kind dry and off. I just shrugged it off and thought maybe it was in my head. After a few more days, it was very apparent it was not in my head and the source was sadly due to the air purifier. My husband also complained of the same symptoms, with both of our throats feeling like a large amount of dust particles were clinging to and building up in our throats or like we had hair balls (we have no pets, btw). I even tried changing the air filter but the symptoms just seemed to get worse. After turning off the unit completely our throats have completely recovered within just a few days of discontinuing the use of the purifier.

3) EMF emissions: Now this might not be an issue for some, especially because many technology-based devices and what not, give off some level of EMF exposure these days, but based on the levels being emitted from this machine, I felt compelled to share just in case it is an issue for some. Shortly after receiving the air purifier, we received the two different, (highly rated and dependable) EMF meters that we had also just ordered. We initially didn't even think this was something of concern with this machine, but my Daughter brought it to our attention when she enthusiastically went around the house breaking in our two new gadgets, checking this and that. The microwave and this air purifier (unfortunately) were the two most concerning items. The microwave was no surprise of course, but this fairly smallish machine, when turned on, showed to be emitting the most unhealthy amounts of EMFs that both meters were able to easily detect. Dangerously high, than even our computers, our router and smart phones. That was also kind of the final deal breaker that lead to our decision to discontinue the use of this machine.

Unfortunately, we admittedly got overconfident based on this being the highest rated and one of the more affordable machines out there, that we were too quick to dispose of the box it came in, thus making it not possible to return. Lesson learned there too. I did do a lot of research on practically every machine out there, so I’m not sure which machine to go with (and trust) next. It seems you take gamble no matter what you try, even with the more expensive machines available on the market these days.

So, there you go, and our search for another suitably sized purifier that’s hopefully reasonably priced, continues on :(

Amazon Customer
1.0 out of 5 stars Wish I had been able to read the manual before purchasing
Reviewed in the United States on February 23, 2020
Verified Purchase
Have never purchased an air purifier so maybe this is normal. Quotes straight from the manual.

Do not run the power cord over carpeting
Do not use an extension cord as this may overheat and run the risk of fire
Do not use under direct sunlight. Never expose to the sun directly,
Keep the appliance away from plants and animals
This appliance is not suited for the disabled person
Do not use an extension cord
Do not tip over the appliance
Regularly clean the power plug
Vacuum the filter every four weeks
Replace the filter every 6 months
Do not place in large rooms, The recommended room size is 80 square feet. (description says 194 sq ft)
Open the windows frequently to insure proper air circulation inside your home
Read more
109 people found this helpful
Helpful
Comment Report abuse

Andrea W.
3.0 out of 5 stars Does Not Remove Odors
Reviewed in the United States on November 17, 2019
Verified Purchase
I keep the cat's litter box in my upstairs bathroom and have been trying to find an air filter to help combat the odor. It's not too bad--I use fresh scent litter--but my cat has hyperthyroidism and pees frequently, so it's more challenging. I've done a ton of research--even trying some things used in nursing homes--and decided to try this air purifier based on the reviews. I didn't want to spend an exorbitant amount of money for an Industrial grade purifier, but wanted the most effective one available for home use. I was very disappointed. It did absolutely nothing for the removal of odors in a bathroom with the door almost closed. (And yes, I did remove the plastic from the filter before using it.)
I have moved the purifier to my bedroom and the air feels clearer, so it must be effectively removing dust, dander, etc. It is a bit loud, but I have gotten used to it. I'm keeping the unit to clear the air in my bedroom but am sorely disappointed that it didn't work as claimed in the bathroom.
Read more
37 people found this helpful
Helpful
Comment Report abuse

Jonquil McDaniel
TOP 500 REVIEWER
5.0 out of 5 stars can be noisy on high, but otherwise discreet and excellent for small spaces
Reviewed in the United States on February 13, 2020
Verified Purchase
This is one of those air purifiers you can just set up on a shelf and forget about until it's time to change the filter. I'm impressed by its performance compared to its size - I have another brand/model that is twice as big and this almost keeps up the pace with it. It's perfect for large rooms, but I would recommend a larger one for use with the rest of the home. Very basic rig, which makes it highly convenient for me. I have weak respiratory and thus need air purifiers to breathe while I'm asleep, so I can at least testify the air filtering DOES work to eliminate respiratory irritants. I slept like a baby with it in my bedroom!

Update: I noticed a scathing review on here which has inspired me to add more detail to my review about this. I have an air quality tester.... I kind of need to. I have BAD respiratory issues from an autoimmune disorder and I can't really breath and get sick a lot if I'm not in a clean air environment. Scariest of all, I'll stop breathing at night. No dust, no dander, no pollen.

When I first got this, I tried it out in two rooms that normally take a larger device and both tested well. I have two cats. One of them is a 25lb long hair. I live in a very rural southern area with lots of dust and pollen, too.

Now I seriously doubt if you have a very dusty home, especially dry with positively charged air, and/ or if you smoke that you'll see great results with this. I would highly recommend moving up to a larger one.

However, given its size, it DOES pack a punch compared to every other compact I've tried in the past.

Additionally, most electronics will emit a high EMF while turned on. Certain radio devices - which includes microwaves - will emit this even when they're turned off. Unless you're experiencing symptoms of being exposed to too much of it (like paranoia and psychosis at worst), there's really not much to worry about. Ever noticed how uncomfortable you feel inside a place with old wiring? That's because it puts out too much high EMF for you not to be sensitive to it. Part of ghost hunting is ensuring a location doesn't just sit on top of a grid line or just have old wiring screwing with the EMF levels. Part of troubleshooting poor 4g/wifi/etc in a location is testing the EMF frequencies in that area to see if anything is screwing with the signal.

With all due respect, you should try testing your desktop computer, your router/ modem... hey, even just those bundles of electrical cords you have in various spots. If you're still worried about it then God speed to your future life of tinfoil hats. 🤷‍♀️
Read more
25 people found this helpful
Helpful
Comment Report abuse
See all reviews from the United States