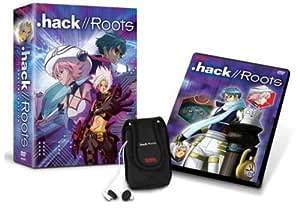 TaN is no more, Ovan is missing, and the Twilight Brigade is in disarray. As a result of their illegal activities, TaN has been forced to disband, the leaders of the guild prohibited from accessing the game. However, the mysterious disappearance of Ovan has left little time for the Twilight Brigade to rejoice. And as rumor concerning his possible location and motives spread dissent through the ranks, the Brigade finds itself facing its final days together. Yet as turmoil brews amongst the members of the Twilight Brigade, Ovan lies trapped in suspended animation; his fate in the hands of Yata and Pi, the reincarnation of the former TaN leaders. Meanwhile, the bizarre appearance of the player Tri-Edge will shatter the lives of Haseo and everyone else in The World. Genre: Action, drama, sci-fi. Production by Bee Train, Director Koichi Mashimo, and Music by Yuki Kaijura. Original character design by Yoshiyuki Sadamoto. Special Edition includes Vol. 3 of . hack//ROOTS and an exclusive mp3 case.

As the cyber-adventure .hack//Roots reaches its mid-point, the sinister TaN Guild has been forcibly disbanded and the members' accounts terminated, but ominous events continue to shake the world of Game. Shino, Tabby, Sakisaka, and Haseo feel lost when Ovan fails to return from his search for the Key of the Twilight. They don't know that Ovan has been captured by a mysterious group that seeks to extract data hidden in his PC body. But these threats pale before the appearance of Tri-Edge, a maniacal "PK" (Player Killer) whose attacks destroy avatars--and render players unconscious in the real world. Can Haseo stand up to such a deadly foe? The imaginative work of director Koichi Mashimo and his artists make .hack//Roots a stand-out: when Shino is attacked by Tri-Edge, her avatar seems to bleed data in a striking visual. As a group of small-time PKs attack Haseo, the music shifts from the Queen of the Night's aria in The Magic Flute to a Japanese pop tune via a harpsichord bridge. The Special Edition comes with a special .hack//Roots iPod case. (Rated 13 and older: violence) --Charles Solomon

N. Alhuda Alkhateeb
5.0 out of 5 stars saleh2002fadel@hotmail.com
Reviewed in the United States on October 7, 2008
Verified Purchase
Because of the way the parts of the '.hack' package are being released, I am not sure if this is a series of episodes based on video games, or vice versa. A rather ingenious marketing ploy will probably have many of us buying '.hack' releases for some time to come. Fortunately, from what I have seen the producers have spared little expense in creating a quality product. Therefore, other than the amount we will be out of pocket, there is very little to complain about.
Read more
Helpful
Comment Report abuse

kirkland
5.0 out of 5 stars Great condition
Reviewed in the United States on March 12, 2014
Verified Purchase
Product came on time with no issues just as advertised when I first bought it. I would recommend this item to anyone into this series
Read more
Helpful
Comment Report abuse

Vettedream
5.0 out of 5 stars .hack
Reviewed in the United States on April 23, 2013
Verified Purchase
This is a very interesting series! My 17 yr. old son says this is one of the tops in animae videos!
Read more
Helpful
Comment Report abuse

Happy Otaku
5.0 out of 5 stars Five Stars
Reviewed in the United States on May 29, 2015
Verified Purchase
Awesome.
Read more
Helpful
Comment Report abuse
See all reviews from the United States