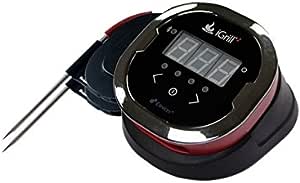 Visit the iDevices Store
4.0 out of 5 stars 944 ratings
Currently unavailable.
We don't know when or if this item will be back in stock.

Whether you're an award winning pit-master or a novice backyard griller, the iGrill2, a Bluetooth Smart meat thermometer, makes grilling and smoking easier, more convenient and a whole lot smarter. With a 150 foot Bluetooth Smart range, you can get back to your guests and keep a close watch on the temperature progression of your meat from your mobile device, using the free iDevices Connected app. You'll receive an alert once it's ready to take off the grates. Your friends and family will be left wondering how you fired up such a delicious meal without getting stuck by the grill or smoker. You'll never want to cook any other way, and with the iGrill2, you won't have to. Grill With Precision. One year limited manufacturer’s warranty.

4.0 out of 5 stars
4 out of 5
944 customer ratings
How does Amazon calculate star ratings?
Amazon calculates a product’s star ratings based on a machine learned model instead of a raw data average. The model takes into account factors including the age of a rating, whether the ratings are from verified purchasers, and factors that establish reviewer trustworthiness.

The attached pictures show the test setup I did.

- All four probes (three meat, one grill) suspended in a pot, not touching each other or the metal of the pot.
- I added rolling boiling water which should have been close to 212 degrees.
- Screen shots show the temperature plots. I swapped probe one and two to confirm it was the probe and not the receiver jack. You can see how variable the reported temperature is coming from the same medium.

Additionally, the grill temperature probe (Number four in the series) when in a grill stops working at about 500 degrees. When it cools off it returns to function.

Lastly, the Bluetooth range is less than advertised. Outside, direct line-of-site, the range is maybe 20 feet.

When it worked I liked it. But now, not so much. I've inquired about warranty service.

Amazon Customer
1.0 out of 5 stars JUNK! Absolute JUNK. Great concept, HORRIBLE hardware!
Reviewed in the United States on August 3, 2016
Style: English PackagingVerified Purchase
Absolute JUNK! I currently have 3 of them, and thats not because I like it. I'm going to be straight forward and honest here, the concept is GREAT and its what drew me to the Igrill2. The bluetooth, the graphs, timers, 4 probes, super user friendly, etc. Unfortunately the concept is only as good as the hardware itself. The first one had to be warrantied out because it was having false readings on the 3 other probe slots when I didn't even have a probe in those ones. I called customer service and after my proof of what was going on, they sent me out another device. And by device, I mean just the monitor! Not any probes, not the rubber housing it lays in, not a new box with new anything, I'm actually 99% sure it was a refurbished unit they stuck in a bubble wrap envelope and shipped it to me... but honestly, I didn't care as long as it worked and it did.....for about 2 months. So after the 2 months(using it here and there so 10 cooks maybe), it started giving me false readings and you can actually see if you google it, they had a re-call some time ago for this same exact thing. Anyway.......so me thinking its the probe, I look online to purchase another probe...$30.... a 1/3 of the cost of a whole new igrill2 device. Anyway I got in a jam needing it the next day actually, so I just bought the mini off of "amazon prime now" so I could have it in 2 hours. Need I mention the igrill mini WITH THE PROBE(same probe that comes with the igrill2) was only $39! Guess what...... went to use it, stuck it in the cold meat before I even put it on the grill....read 139 deg. Believe my story or not, but 3 strikes your out in my book. I will not push another product because that is not my intentions of this post, but I encourage you to shop else where. I know I'm done with them, and if you DO decide to give them a shot, I wish you the best of luck. Anyway, hope this helps someone before the make the mistakes I did.
Read more

Pete L.
1.0 out of 5 stars Look elsewhere product isn't worth it.
Reviewed in the United States on September 6, 2015
Style: English PackagingVerified Purchase
I really wanted to like this product, but its just not ready for prime time. I bought this product at the beginning of this summer and have been using it a lot over the past few months, probably 1-2x a week. If you have line of sight no walls and are within 30 feet this product rocks. The temp at first was mostly accurate and you'll have no issues seeing whats going on in your smoker/grill/oven. Over the coarse of the summer this is what I found out:
Product was used with a Samsung Note 4 and Samsung S6 Edge+. The grill is about 7 feet from the back door.
Say you have a man cave in your basement that you and the guys like to hang out in when its 90+ you should look elsewhere as this product won't connect even if the phone is placed within 15 feet and 1 wall.
Say you are on the first floor of your house, this product won't connect unless you are within 15 feet with phone in hand (If its in your pocket, good luck)
If you're on your second floor you have to be about 10 feet away from the back wall.
If you're in your attic, well just don't be in your attic.
Say you want to use Sidesync while leaving your phone on a window ledge with LOS of the iGrill and within 10 feet,and hooking the phone up to a PC/tablet/laptop via WiFi the product will connect until the batteries in the iGrill reach 60% at which it will start to lose connectivity.
Lately ( 4 months past purchase ) I have found that some of the temperature probes have been a bit off. Probes 2 and 3 ( Meat Probes ) have generally been about 10-20 degrees high for the last 2 or 3 cooks.
All in all the product is a big let down with too many compromises. If you don't have walls, and can stay within 30 feet of the product its great, but yeah the whole point of the product is so that you can see your temps while chilling back on your sofa drinking a beer... I am a huge tech guy and really love using all sorts of new techie things, but I think I should have gone old school and just gotten one of the old wireless probes for half the price. The only thing that is cool about this product is using Samsung side sync and having the temperature display on one of my side monitors while doing whatever on my main. But that's really more of a Samsung feature than an IGrill.
Read more
111 people found this helpful
Helpful
Comment Report abuse
See all reviews from the United States

Mark
4.0 out of 5 stars Great product but be aware
Reviewed in Canada on May 10, 2016
Style: English PackagingVerified Purchase
No problems so far. My friend bought the same device and after a year the temperature probes failed. Manufacturers warranty immediately sent out new ones for free so that was good.
Read more
2 people found this helpful
Helpful
Sending feedback...
Thank you for your feedback.
Sorry, we failed to record your vote. Please try again
Report abuse

Darcbutl
5.0 out of 5 stars Like it very much
Reviewed in Canada on June 8, 2017
Style: English PackagingVerified Purchase
Works great only thing was setup took longer . They tell you to down load iDevices Connected app but the app doesn't have a igrill device on it. I had to go to the Weber IGrill2 app to get it to work right, once I downloaded the app setup was very simple.
Read more
Helpful
Sending feedback...
Thank you for your feedback.
Sorry, we failed to record your vote. Please try again
Report abuse

BigMurray
5.0 out of 5 stars Still great after 2 years of use!
Reviewed in Canada on December 29, 2018
Style: English PackagingVerified Purchase
Great addition to our grill; use it to cook indoors with the oven as well (roast, turkey, etc...) Ordered 2 years ago and still works great. iOS app could have a better UI, but thermometers and Bluetooth work well.
Read more
Helpful
Sending feedback...
Thank you for your feedback.
Sorry, we failed to record your vote. Please try again
Report abuse
Load more international reviews

Amazon Customer
5.0 out of 5 stars Works Awesome!
Reviewed in Canada on August 25, 2016
Style: English PackagingVerified Purchase
The Igrill2 works awesome, allows you to monitor up to 3 different meats selections and a 4th to monitor grill temperature, the app works awesome also and I highly recommend the product especially if you own a treager or other style pellet grill and you live to cook slow.

Sookie
5.0 out of 5 stars Why wouldn't you want to know your meat temperature on your phone?
Reviewed in Canada on August 5, 2016
Style: English PackagingVerified Purchase
Best birthday present ever for my tech-loving, meat-grilling man.
Its actually really nice to have two probes, as I've learned from using them both is that two pieces of meat actually will cook at very different rates.
Read more
Helpful
Sending feedback...
Thank you for your feedback.
Sorry, we failed to record your vote. Please try again
Report abuse

Love2Travel
4.0 out of 5 stars Worked well
Reviewed in Canada on June 1, 2018
Verified Purchase
Bought it as a gift. It worked quite well.
Read more
Helpful
Sending feedback...
Thank you for your feedback.
Sorry, we failed to record your vote. Please try again
Report abuse

Page 1 of 1 Start overPage 1 of 1
This shopping feature will continue to load items when the Enter key is pressed. In order to navigate out of this carousel please use your heading shortcut key to navigate to the next or previous heading.
Back
Next
Pages with related products. See and discover other items: cardinals decor, 5 min timer, running decor, summer bbq, bbq pro, bbq weber accessories