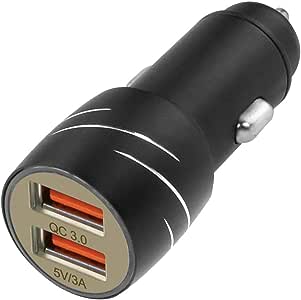 We specialized in Mini Projector, Power Bank, Car Charger and other digital products research and development, finished and semi-finished products processing production and sales all in one manufactories.

2 USB ports can fast charge 2 devices in the same time.

4.2 out of 5 stars
4.2 out of 5
3,277 global ratings
How are ratings calculated?
To calculate the overall star rating and percentage breakdown by star, we don’t use a simple average. Instead, our system considers things like how recent a review is and if the reviewer bought the item on Amazon. It also analyzes reviews to verify trustworthiness.

Jon Jablon
4.0 out of 5 stars Good product, but some phones only charge in one port.
Reviewed in the United States on December 9, 2014
Verified Purchase
This is a product that seems sturdy and has been reliable thus far. That being said, it has one flaw - although it's not really fair to complain about it, considering it was clearly disclosed in the product's description. There are two ports; one is for Apple and 'other,' and the other is just for 'other.' My wife and I both have Android devices (she has a Droid 4 and I've got a Galaxy S3) and both ports will not charge both phones. For whatever reason, my phone charges well in both ports, but hers, the Droid 4, only charges in the non-Apple port, despite both ports being able to charge Android devices.

But again, the description warns about that - although it doesn't make the lack of charging the Droid 4 in one port any more convenient. It wouldn't be so bad if there were just one cord; since there are two, though, it's a trial-and-error system for her to find which one is the correct cord. ...I guess I could just buy different cords to differentiate, but I haven't thought that far ahead.

Either way, this has been a solid product and I recommend it. Can't comment on how it works with Apple devices, but when our Androids are in the ports that work for them, this charger has behaved very well so far. I don't have benchmarks on charging time except that it seems to rival the charging time of a wall charger.

Charge rate, doesn't matter if it's at 2.1A, will not charge the phone/tablet fast enough while it's in use. This is not the charger's fault. I discovered it's actually the phone's/tablet's fault. My older phones will fully charge while in use, while drawing at 1.2A during charging and while in use. My tablet 7" will draw at 1.6A, while in use, and achieve full charge. My Tablet S draws at 2A, but sustain, with a slight drop every hour (4%). My Note 2 and HTC One M8 will draw at 1.8A, but lose about 8% every hour during usages. If I don't plug them in, they lose about 20% every hour during usages. Lots of power hungry apps.

I'm a happy camper. Wish they make the same unit with smaller profile. None the less, it's my go to unit no matter where I go. I got a few other charger I used as backups.
Read more
One person found this helpful
Helpful
Comment Report abuse

Ameya
5.0 out of 5 stars Best non quickcharge car charger
Reviewed in the United States on July 26, 2015
Verified Purchase
This device has 2 ports which are clearly labelled. "A" for Apple products and "NA" for non-Apple products. On other devices they name it as "2A" and "A".which can get confusing to the non tech savvy.
In reality this charged all my android devices with both its ports. I did not have apple products to test it with. The stronger port charges faster and gets recognized as AC port, the other one gets recognized as USB strength and charges slower.
Both the charging ports have independent supply so when one device is being charged it does not slow down the charging of the other gadget.
It does not have quick charge 2.0. So if you have a snap dragon 800+ device and want much faster charging this is not something you want to buy. But those chargers are much more expensive. It has lasted over a year for me without any wear.
Read more
One person found this helpful
Helpful
Comment Report abuse

Cesar@lf
4.0 out of 5 stars Great Item, ordered 2, one of them died suddenly.
Reviewed in the United States on July 29, 2013
Verified Purchase
It keeps up its promises and charged both, the ipad an Iphone simultaneously. It charged two ipads at a time, an iPad4 with the 1Amp and an iPad3 on 2.1 Amps, one of them charged @100% and the other above 80%

The sise of the powergen is not so convenient as other products, but this is a minor issue since you can actually have power for two devices, and in the road, this is a very good thing to have.

I did not give it 5 stars just because one of my two Powergens died suddenly, it happened while charging two iphones just a couple of months after I began using it, I tought it was not an abusse since all the time it is charging two ddevices. It was quite hot when I disconnected it. Never worked again and fuse was ok.

The other one (which charged 2 ipads simultaneously and it is not gonna happen again since it is my last one) is working fine. I guess I received a flawed one and with time it just end up failing. But since I brought them to Mexico, I cannot go back to claim my warranty on time.

The working led is really useful since you can tell it is working and in some cars, without the key on, they receive no power.

Sometimes, it is not easy to make it fit into every socket because of the half-sphere shaped locks, but they are very good on holding the device when mounted horizontally.

GaryDee
5.0 out of 5 stars Exceeded my expectations on Note 2 and Nexus 7
Reviewed in the United States on May 17, 2013
Verified Purchase
I do a lot of work traveling and enjoy using Google maps in my work van. This means leaving the screen on all the time and taking a lot of power (with phone calls and streaming through Bluetooth).

As with most of us when doing phone upgrades, we use the car charges from previous phones. For me it was the chargers from my old Motorola Androids. As the phones got bigger the charges just could not keep up, draining the battery even when plugged in.

This USB charger has changed all of that. It will charge my Samsung Note 2 the same if not faster than its home charger (though the battery does not get hot). Regardless of the port, it's blazing fast. I am also able to charge my BT headset at the same time. It's powerful, fits in the power point firmly and runs cool. I do wish the little LED that shows its working was a little brighter, but now I'm just nit-picking!

Page 1 of 1 Start overPage 1 of 1
This shopping feature will continue to load items when the Enter key is pressed. In order to navigate out of this carousel please use your heading shortcut key to navigate to the next or previous heading.
Back
Next
Pages with related products. See and discover other items: car 2 amp phone charger, google nexus 5 charger, galaxy note 3 charging port and charger, galaxy s3 anker battery, nexus 5 car charger, nook color charger cable