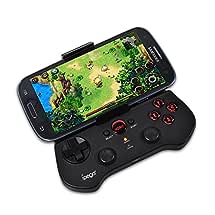 Brand: 5430net
Platform : Android
3.9 out of 5 stars 510 ratings
Currently unavailable.
We don't know when or if this item will be back in stock.

3.9 out of 5 stars
3.9 out of 5
510 global ratings
How are ratings calculated?
To calculate the overall star rating and percentage breakdown by star, we don’t use a simple average. Instead, our system considers things like how recent a review is and if the reviewer bought the item on Amazon. It also analyzes reviews to verify trustworthiness.

Tari L Collins
5.0 out of 5 stars Great Value For the price with a few flaws
Reviewed in the United States on March 2, 2019
Verified Purchase
Pros:
+++ Super portable. Very small and lightweight.
+++ D-Pad and buttons feel amazing
+++ Battery lasts longer than expected
+++ No input lag at all for me
+++ The phone clip fits my Galaxy S9+ perfectly and securely.
+++ Works on all mobile emulators that I have tested.

Cons:
-- Analog sticks are pretty bad. I'm glad they are there tho. Was able to play Super Mario Sunshine on my S9+ pretty well. The analogs only go in 8 directions tho so they are not ideal.
-- Lack of extra buttons. Especially lacking R2 L2 and R3 L3.

All in all a great little controller for the money
Works pretty okay for 3D games (N64 GCN PS1 PSP) works amazing for Gameboy advance, SNES, NES, and other similar emulated retro systems.

Josh Davis
5.0 out of 5 stars A top controller buy for the price !!!
Reviewed in the United States on January 4, 2017
Verified Purchase
This is perfect for old school gaming. All i have to do is first charge out of the box, then turn on bouetooth and pair with Home button plus X held down, takes a few seconds and done. I had a conflict with my wifi at first and couldnt connect but that ended up being a one time problem.
The controller is lightweight and feels good, though the analog sticks are kind of crap and slip a bit while controlling.
The charge lasts a long time and the buttons are easily mappable and recognized by the best Android google play console emulators.
One issue:sometimes the controls are delayed, as if bluetooth connection isnt very strong, and sometimes i have to reconnect but that doesnt take long. Itll be a jump then a split second later character jumps. Its fixable and i enjoy this controller. The phone holder portion works great and gives the whole thing weight, but i kind of prefer it without the phone being held.
Read more
Helpful
Comment Report abuse

Selita Melody
3.0 out of 5 stars Average gamepad with a few quirks
Reviewed in the United States on May 31, 2015
Verified Purchase
This is an average gamepad, working on both android and iphones. With iphone, it was detected using the app blutrol(it lets you map touch spots on the screen to buttons). With android some emulators detected it by default, but didn't test if there's an application similar to blutrol that lets you configure this for games which are not supported by default. The gamepad itself, is quite small, perhaps similar to an iphone 4, maybe an inch larger than a deck of cards. This can be a good and a bad thing. The small factor means it's quite portable, possibly fitting well in a pocket, a purse or the small pocket of a backpack. The bad thing about the size is that, if you have big hands, it might feel too small (although most phone-oriented gamepads probably suffer from this). It's very lightweight, and the internal usb-rechargable battery holds charge forever (I remember playing more than a week without recharging after a full charge).
The D-pad is a bit stiff, maybe similar to an original NES, and if you have big thumbs, it might be a bit difficult to play action-y games that require precise movement, although not impossible. I don't remember playing many games with the analogs (or if there was any game compatible with them) but I recommend assuming they don't exist. They don't have a good feeling to them, and are a bit stiff, and will doubtfully be capable of precise movement. They are nothing like PSP's analog. The rest of the buttons feel overall good, even the shoulder buttons. One thing I did not expect was to telescopic phone holder/clip working so good. It stretches quite well, being able to hold firmly and iphone 4 with ballistic cover, galaxy s5 with cover and a galaxy note 2 without cover. It has 2 rubber pads which hold your device in place. One of the pads in my phone unglued, perhaps due body heat in my pocket or heat in the backseat of my car, but at least with the iphone, this was not a problem(have not tested with other devices since this happened).

My biggest complain about this gamepad is that, despite having several modes, only one really worked, and that mode did not detect all the buttons. No matter how good the buttons feel, it's no good if they are not recognized. The original reason I got this particular pad was the amount of buttons vs Price, and sadly got dissapointed. I only recommend this if you don't need more than 4-6 buttons + D-pad, and you don't have money for a better more compatible gamepad (if there's such thing, as I have not tested anything else at the moment of this review).
Read more
Helpful
Comment Report abuse

Alicia
5.0 out of 5 stars AWESOME PRODUCT! Great Experience!
Reviewed in the United States on June 15, 2015
Verified Purchase
Product was as described and works great on my iphone and my linux computer. I'm going crazy over here playing all the old school retro style games (Super Mario World, Super Mario Bros II, Frogger). Works with many games and emulators as well. Bluetooth pairing was a sitch. The only thing is that on iphone not all the buttons will map correctly such as the start and select buttons. Other than that you can always download extra software that my or may not help such as "controllers for all".

I like the analog sticks on this controller vs the ones that roll around. These give you more control. The buttons give the perfect amount of feedback and that "click" while pressing buttons that I have always loved.

The only thing I would vote a downside is that the phone holder is not tilted, some phone gameplay can be awkward.. which may be due to my otterbox case.

As a matter of fact, it was so good I also bought another model, the iPega 9025.. but I like the feel of the 9017 bit better (for small baby hands like mine), however mapping works better on the 9025.

All in all a great product! Loved spending old school bonding time with the little sis playing the games from our childhood :)
Read more
Helpful
Comment Report abuse
See all reviews

Sheggsliveth
5.0 out of 5 stars The battery hold
Reviewed in the United Kingdom on April 6, 2019
Verified Purchase
Thanks have gotten it, it works well and the battery hold
Read more
Report abuse

lisa Mcguinness
1.0 out of 5 stars One Star
Reviewed in the United Kingdom on January 8, 2018
Verified Purchase
Complete and utter waste of money I want it refunded
Read more
Report abuse