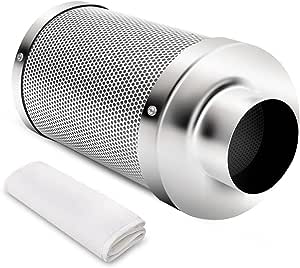 Visit the iPower Store
4.6 out of 5 stars 1,076 ratings
Amazon's Choice recommends highly rated and well-priced products.
Amazon's Choice for "ipower 4 inch air carbon filter"
Available at a lower price from other sellers that may not offer free Prime shipping.

iPower Air Carbon Filter Odor Control with Australia Virgin Charcoal for inline fan. Professional grade filter that will handle the nastiest odors produced by the prettiest plants. iPower filter contains very special virgin carbons that come from some of the oldest, most pressurized sources on earth. Not only does the iPower filter have exceptional odor control, but it is a filter that keeps on giving. After the first year of usage, remove the top flange and the bottom mount, flip the filter unit upside-down and re-mount the flange and the bottom mount in the new position and enjoy another year of odor-scrubbing performance.

【Easy-to-Setup】Aluminum construction: weighs 50-Percent less than the competition. Easy install with a simple plug-and-play feature that will keep you free from any unnecessary mess or hassle.

【Exceptional Odor Control】iPower filter will not only soak up and eliminate some of the most undesirable to keep your space smelling clean and fresh, but also eliminate additional harmful and potentially ill-fating chemicals from the air you breathe.

4.6 out of 5 stars
4.6 out of 5
1,076 global ratings
How are ratings calculated?
To calculate the overall star rating and percentage breakdown by star, we don’t use a simple average. Instead, our system considers things like how recent a review is and if the reviewer bought the item on Amazon. It also analyzes reviews to verify trustworthiness.

Sean P Curtiss
5.0 out of 5 stars Awesome filter. No smell, nice clean air!
Reviewed in the United States on May 29, 2019
Size: 4" Carbon FilterVerified Purchase
I used this with a digital fan system. It is the absolute best. I will get another when i find the extra $. My tomatoes don't smell at all!!! And we all know how much tomatoes can smell up a room. My 90 year old grandmother lives with me now that she is getting up in years, and she has no idea i am growing tomatoes. I cant wait to surprise her with some gourmet pasta sauce at the end of the season!
Read more
25 people found this helpful
Helpful
Report abuse

wPublicName
4.0 out of 5 stars Ok product.
Reviewed in the United States on April 6, 2019
Size: 4" Carbon FilterVerified Purchase
I have purchased 2 of these actually. The first one was fine. The second one leaked air from the top where the flange for the vent attaches to the filter media itself.
One nice thing about the filter is that you can technically disassemble it, which I did for the leaky one, and put in a gasket (made of the packing material for the filter actually) which stopped the leaking. Having to do this is the only reason its not 5 stars. Had I not realized that it was leaking it could have been awkward.

Despite being able to mostly disassemble this, you can't replace just the media, at least not with media of your own. If/when the charcoal becomes ineffective, plan on replacing the entire unit. I have been using my older one for about 6 months for filtering cigarette smoke and seems to be about as effective now as it was on day 1. I don't know how this translates for other filtering purposes.

Specifically about smoke. This filter's primary intended application is likely not for smoke. Smoke has particulate that a charcoal filter alone shouldn't be expected to remove.
That said, the air coming out of the filter (with no modifications) appears clear, but you can still smell smoke odor even though the intensity of the odor is nowhere near as strong as no filter and is better than a lot of filters.
I have owned other filters specifically for smoke and smoke odor that perform better (Homes aer smoke grabber specifically), but the units they work with are cheaply made, weak (you have to carefully direct the smoke into them), and bulky (not easy to just set on a desk next to your ashtray), and they need frequent replacement which becomes expensive very fast.
With this charcoal filter, you pick your fan, you install ducting, and you pick where to place the bulky parts. Not to mention its customizable. My setup actually goes CML Supply Solder Smoke Fume Absorber Replacement Filter 5pcs (at the intake duct opening) -> Nordic Pure MERV 12 Furnace Filter media (cut and shaped into cylinder to fit inside the charcoal filter - keep the pleats though) -> this charcoal filter -> the supplied "pre"filter (wrapped around the outside of the charcoal filter). With all of this in place, then the smoke odor (to me, a smoker) is unnoticeable. Perhaps a non-smoker in my apartment might be able to tell I have smoked in here, but my objective was to reduce the odor to where my neighbors can't smell it, which this has done, and this charcoal filter has certainly done the heavy lifting to accomplish that.

JayBo
4.0 out of 5 stars Clogs up don’t buy - Seller made it right!! :)
Reviewed in the United States on October 26, 2018
Size: 4" Carbon FilterVerified Purchase
This is an update to the review that follows. The seller contacted me and has offered to either replace or refund! I have upgraded the star review to a 4 instead of a one due to their customer service! Thank you for being so customer friendly! Will try again.

This is a review for the filter. I purchased one and used it in my grow tent for a single plant. It did not do well keeping the smell away. At all. I didn’t really think about it, just that growing you know you will have some smell. I moved and when I got everything set up again I noticed the air was restricted out the blower and it was because the charcoal had clumped together and no air could get through. I figured it was because it was in a box in my garage in Texas and humidity got to it. Makes sense. Kinda. So I ordered another filter. Again, no help with the smell. I now live in the mountains of New Mexico and the air is dry. New filter again didn’t keep smell down and it too stopped up. The tent air is usually around 40% humidity so SURELY this isn’t the problem. Idk what it is but STAY AWAY from iPower filters. Just saying.
Read more
9 people found this helpful
Helpful
Report abuse

Darrel Daggett
5.0 out of 5 stars Is what it Is
Reviewed in the United States on March 21, 2019
Size: 4" Carbon FilterVerified Purchase
Got what i expected when i expected works like it should... not a sliver of room to complain here. Ive bought high end filters before.. and honestly in a small grow... i se no difference. Save the buck, ditch the expensive filter.. this thing works.
Read more
9 people found this helpful
Helpful
Report abuse

Dustin
4.0 out of 5 stars Great but single stage doesn’t cut it.
Reviewed in the United States on June 26, 2019
Size: 4" Carbon FilterVerified Purchase
Ultimately I’m surprised there are not better products on the market. Why they don’t make these refillable is beyond me or why they don’t also add multi stage designs.

These are single stage one time use filters, the bad part regarding these is they drop in efficiency over time. No products address this, if you are recycling the air through these they will work great, if you are pulling air and dumping the exhaust elsewhere and are cautious of the original smell, you’ll need to design something custom.

Pete L
1.0 out of 5 stars Waste of $$$
Reviewed in the United States on January 30, 2020
Size: 4" Carbon FilterVerified Purchase
I used this filter in a 4 x 4 tent for 1 indoor vegetable & herb garden grow. After 4 months the filter was completely clogged. My air quality is good too, not dusty...I believe the high humidity ruined this filter. You'd think a filter made for this purpose wouldn't be ruined from humidity. Also, the 4" connector is too large to fit standard 4" venting around. This is also ridiculous. I would not buy again. Waste of $$$. Spend a little more $ and get a decent filter folks.
Read more
3 people found this helpful
Helpful
Report abuse

KimG
4.0 out of 5 stars Does what ut says
Reviewed in the United States on April 13, 2019
Size: 4" Carbon FilterVerified Purchase
It does what it says. With an ac infinity and muffler no noise. I dont even need my muffler. I use it in the room close to my crawl space . It took the smell away i also attached a hepa filter to it a few weeks later because i felt it was just scrubbing the air not filtering the microscopic mold spores. But far as it running by itself it did stop all damp smells within about 3 hours . With the door closed and venting to exterior elements. Not bad for the cost . Far as longevity i have not had an issue running on a 45 min on 1.5 off for roughly 6 months . But the summer will give the true test
Read more
3 people found this helpful
Helpful
Report abuse

JC Customs
5.0 out of 5 stars 5 Star Filter
Reviewed in the United States on November 16, 2018
Size: 4" Carbon FilterVerified Purchase
I purchased this as an alternative way to vent my vent hood for my cook top stove due to being unable to vent to the outside. The charcoal filter that is an optional upgrade was 4 times the cost of this and needed to be replaced often. With a simple 6" to 4" adapter I was able to use this instead. This filter is massive and well built and will last me many years. It does not restrict air flow and works great. What ever your use for this, it will work in any application.
Read more
4 people found this helpful
Helpful
Report abuse
See all reviews

matt
5.0 out of 5 stars Lasted 2 years running everyday!
Reviewed in Canada on August 5, 2019
Size: 4" Carbon FilterVerified Purchase
Well worth it. It lasted 2 years being used everyday. It was still removing smell at its end but got clogged up and air couldn't pass threw hardly anymore.
Read more
18 people found this helpful
Report abuse

Cody B.
5.0 out of 5 stars Been working great. 100% satisfied
Reviewed in Canada on August 8, 2019
Size: 4" Carbon FilterVerified Purchase
I have been using this now for 1.5 years. Has worked solid. Nothing gets passed it. Still going strong with my 203 cfm 4 inch fan. 350 cfm ac infinity on the way but I dont think I'll hook it up to this guy.
Read more
16 people found this helpful
Report abuse

Greg
5.0 out of 5 stars As promised
Reviewed in Canada on December 6, 2018
Size: 4" Carbon FilterVerified Purchase
Arrived on time. Been working great so far. We'll have to see in a couple of months how it does with odors.
Read more
16 people found this helpful
Report abuse

Paul W Roberts
5.0 out of 5 stars Does what’s expected.
Reviewed in Canada on July 9, 2018
Size: 4" Carbon FilterVerified Purchase
Went from smelling plant odour to none at all. Works well.
Read more
17 people found this helpful
Report abuse
See all reviews