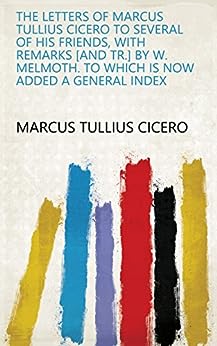 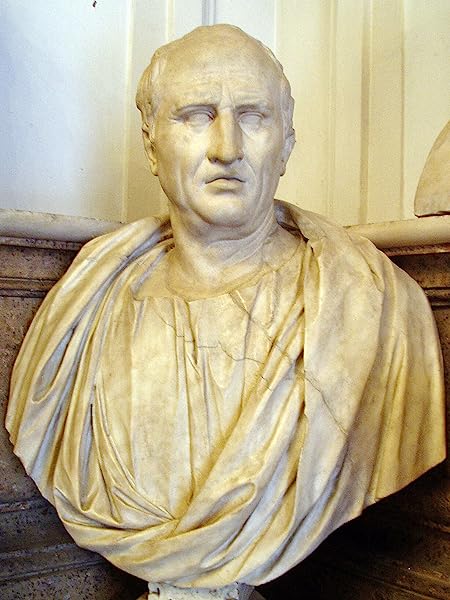 The letters of Marcus Tullius Cicero to several of his friends, with remarks [and tr.] by W. Melmoth. To which is now added a general index Kindle Edition

by Marcus Tullius Cicero (Author) Format: Kindle Edition
See all formats and editions
Sorry, there was a problem loading this page. Try again.
This is a reproduction of a classic text optimised for kindle devices. We have endeavoured to create this version as close to the original artefact as possible. Although occasionally there may be certain imperfections with these old texts, we believe they deserve to be made available for future generations to enjoy.
Read more
Previous page
Next page

Marcus Tullis Cicero (106-43 BC) was a Roman statesman and philosopher whose lifetime coincided with the decline and fall of the Roman republic. His best-known works include On the Republic, On Duties, and Treatises on Friendship and Old Age. --This text refers to an alternate kindle_edition edition.

Marcus Tullius Cicero (/ˈsɪsᵻroʊ/; Classical Latin: [ˈmaːr.kʊs ˈtʊl.li.ʊs ˈkɪ.kɛ.roː]; Greek: Κικέρων, Kikerōn; 3 January 106 BC – 7 December 43 BC) was a Roman philosopher, politician, lawyer, orator, political theorist, consul, and constitutionalist. He came from a wealthy municipal family of the Roman equestrian order, and was one of Rome's greatest orators and prose stylists.

His influence on the Latin language was so immense that the subsequent history of prose in not only Latin but European languages up to the 19th century was said to be either a reaction against or a return to his style. According to Michael Grant, "the influence of Cicero upon the history of European literature and ideas greatly exceeds that of any other prose writer in any language". Cicero introduced the Romans to the chief schools of Greek philosophy and created a Latin philosophical vocabulary (with neologisms such as evidentia, humanitas, qualitas, quantitas, and essentia) distinguishing himself as a linguist, translator, and philosopher.

Petrarch's rediscovery of Cicero's letters is often credited for initiating the 14th-century Renaissance in public affairs, humanism, and classical Roman culture. According to Polish historian Tadeusz Zieliński, "Renaissance was above all things a revival of Cicero, and only after him and through him of the rest of Classical antiquity." The peak of Cicero's authority and prestige came during the 18th-century Enlightenment, and his impact on leading Enlightenment thinkers such as John Locke, David Hume, and Montesquieu was substantial. His works rank among the most influential in European culture, and today still constitute one of the most important bodies of primary material for the writing and revision of Roman history, especially the last days of the Roman Republic.

Though he was an accomplished orator and successful lawyer, Cicero believed his political career was his most important achievement. It was during his consulship that the Second Catilinarian Conspiracy attempted to overthrow the government through an attack on the city by outside forces, and Cicero suppressed the revolt by executing five conspirators without due process. During the chaotic latter half of the 1st century BC marked by civil wars and the dictatorship of Gaius Julius Caesar, Cicero championed a return to the traditional republican government. Following Julius Caesar's death Cicero became an enemy of Mark Antony in the ensuing power struggle, attacking him in a series of speeches. He was proscribed as an enemy of the state by the Second Triumvirate and consequently executed by soldiers operating on their behalf in 43 BC after having been intercepted during attempted flight from the Italian peninsula. His severed hands and head were then, as a final revenge of Mark Antony, displayed in the Roman Forum.

Bio from Wikipedia, the free encyclopedia. Photo by Glauco92 (Own work) [GFDL (http://www.gnu.org/copyleft/fdl.html) or CC BY-SA 3.0 (http://creativecommons.org/licenses/by-sa/3.0)], via Wikimedia Commons.