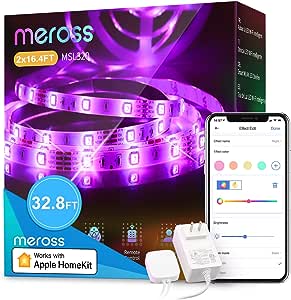 Create a different atmosphere at festivals or parties with this RGB light(Does NOT support color temperature).

The blue light is suitable for parties.

Decorate Christmas and New Years with red and yellow lights.

4.5 out of 5 stars
4.5 out of 5
188 global ratings
How are ratings calculated?
To calculate the overall star rating and percentage breakdown by star, we don’t use a simple average. Instead, our system considers things like how recent a review is and if the reviewer bought the item on Amazon. It also analyzes reviews to verify trustworthiness.

Roshan M.
5.0 out of 5 stars Both strips CAN be combined into a single 33 ft strip
Reviewed in the United States on December 3, 2020
Verified Purchase
Another amazing Meross product, and I'm very happy with the purchase. The package comes with everything you need. Easy to add via the Meross app, and then automatically got added to Alexa. Make sure you update the firmware immediately (the Meross app will prompt you). Once that is done, you will have options to change lots of settings in the Meross app like multiple color transitions, transition speed, flashing, etc. The top review posted here is incorrect. You CAN make a single 33 ft strip by using the included connector to do so. In fact, the package includes two such connectors. For demonstration purposes, I placed one 16 foot strip under my sectional sofa and posted the video as part of this review. Alexa app and voice commands are a bit limited in what you can do compared to the Meross app, but you can still run routines, on/off commands, and change simple colors and brightness level (see video) very easily. Hope this helps!
Read more
12 people found this helpful
Helpful
Report abuse

Tommy S.
5.0 out of 5 stars Meross again delivers the best value!
Reviewed in the United States on December 20, 2020
Verified Purchase
I started with 4 smart plugs and have now upgraded to the entire Meross eco-system. If you are an heavy-Apple user, the most exciting, but expensive feature is the Homekit lineup. I was drawn to the big name brands, but quickly realized that my lighting needs would cost more than my televisions. The blogs led me to Meross smart plugs and after a week of using them, I ordered more plugs, two lamps and the light strips.

In general, I thought the light strips weren't for high-end set-ups and never considered them for my home. While going through videos and pictures of HomeKit accessories, I quickly realized that light-strips and lamps were incredible ways to energize rooms. Meross lights strips are amazing and I've already ordered two more for other rooms in the house. If you are an apple user and want the Homekit control, these are the best option available.

I went with a basic set-up around the back frame of my 70" television. I found the instructions easy and was able to get started right away [is what I wish I could say].

There are several things that need to be addressed for installation. The package comes with two rolls of strips, a few connectors, and the power system for control. You are able to cut the strips in multiple places for shorter applications. I found that the cut options were spaced pretty well, and always seemed to have options for the length needed. Once you make your cut, the silicone that covers the cable needs to be cut off. I simply bit it off because I had trouble cutting the top of the strip (where the silicone is) without snipping. From installation videos I watched, I realized that I was going to need some right angle connectors. I looked on Amazon and ordered a cheap set in anticipation of my install. Once I got going, a few of my early cuts were off because I tried to measure, cut and then apply. Also, trying to get my cut end of the strip into the connectors was difficult. I wasted a good 4 feet with bad cuts and bad connector attempts. I used a very small flat-head screwdriver to lift the four prongs on the connectors and then used the same screwdriver to press them down. I did one strip going across the bottom of the tv making sure to not cover any vents, buttons, or important stickers. I then used the second connector to go up the side. From there I used the right angle connectors to go across the television. This long piece that was my first issue. I cut to short at first and then my second cut damaged the connectors and the strips weren't lighting up. Their times the charm, but I also realized that all of my poor cuts cut be cut further and used later (if necessary) or for other light applications. I got the hang of the process for the last strip and the lights looked great as soon as I plugged them in.

Like always, installation for Meross was effortless and I was controlling my lights form my Apple home center in less than 2 minutes. These will install without the extra pieces, but for a clean install, I recommend spending a few extra dollars and getting the right angle connectors. The left-over strip cable can be used for other installs, but if you're new to the installation process, there may not be much left over.

Overall, these are the perfect value for Apple Homekit light-strips. Many other options, but for the ease of install, price and user-friendly control, Meross delivers again!

J. R.
5.0 out of 5 stars Works perfectly without the need for a "bridge".
Reviewed in the United States on December 4, 2020
Verified Purchase
This thing is great! I already had the Meross app for the light switches I previously bought. So I plugged it in and 3d printed some brackets for the headboard and was done. I loved it so much I went to get another but they were sold out. My loss. The box comes with two separate strips that you can either connect to one another, or the power supply has 2 strip connections. I don't know much about electricity so I don't know how many strips you can piece together with the included power supply. PS it also works with Home Assistant if you're into that.
Read more

Catman
5.0 out of 5 stars ROMANTIC and SOOTHING during STRESSFUL TIMES
Reviewed in the United States on December 12, 2020
Verified Purchase
These precious lights add so much ambience to a peaceful atmosphere. Especially during these times we need to create an atmosphere of tranquillity in the home. This is exactly what these lights accomplish.
The Meross software is idiot proof as it guides you along the way and it's really hard to get it wrong during set up.
Follow the three step simple direction and barbing you have a gorgeous addition to your home.
They are made of very good quality material. The glue is outstanding but it doesnt peal off your paint if you want to move them.
I highly recommend this product.
I had a few questions about other product and the seller is one of the best communicators I have ever had do interact with.
Long Live Meross.
Sincerely grateful for adding such precious atmosphere to my home.
Franco Caterini
Read more