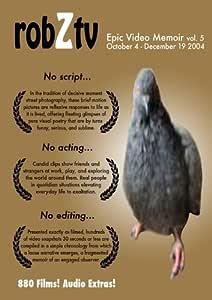 Since February 2003, Robert Zverina has filmed tens of thousands of unscripted digital video shorts using only an ever-present pocket camera. Of these, the best have been selected and compiled into a multi-disc magnum opus which reveals a visually exact, deeply involved, and slightly eccentric view of the world. Inspired by a childlike sense of wonder as well as bemused curiosity about human behavior, robZtv is an unprecedented film series sure to be valued for its aesthetic and documentary qualities. On this disc, 880 individual clips in 120 minutes are presented in convenient looping play, making this ideal background visuals for social gatherings or just zoning out alone or with others. Unpretentious and curiously addictive, this unique cinematic experience might just change the way you see the world. Highlights on this volume: Cross-country eastbound Amtrak ride, Charleston SC, New York City, Minneapolis, Amtrak Empire Builder west, Fremont Sunday Market (Seattle), GBV and Polyphonic Spree concerts, noise music experiments Bonus audio: Watch with original source audio or select music soundtrack improvised by Seattle's own 4Shadows. About robZtv: No script... In the tradition of decisive moment street photography, these brief motion pictures are reflexive responses to life as it is lived, offering fleeting glimpses of pure visual poetry that are by turns funny, serious, and sublime. No acting... Candid clips show friends and strangers at work, play, and exploring the world around them. Real people in quotidian situations elevating everyday life to exaltation. ? No editing... Presented exactly as filmed, hundreds of video snapshots 30 seconds or less are compiled in a simple chronology from which a loose narrative emerges, the fragmented memoir of an engaged observer. Excerpted reviews: "You are never bored, only longing for a few more seconds here or there, to know what becomes of something, to hear the end of the sentence. It makes you aware of your capacity for seeing and taking in and interpreting. It is all generosity." ~Emily Hall, The Stranger "Abstract and beautiful yet utterly lived in. Slices of life so pure, they collapse the distinction between cinéma vérité and visual poetry." ~David Andrews, author of Theory of Art Cinemas "Zverina finds eccentric grace in the commonplace. For him, reality is an exalted state, and his praises are stripped bare of sentimentality by the casual and democratic way he distributes them." ~Regina Hackett, Seattle Post-Intelligencer "Mesmerizing: you don't know how long each clip lasts and you have no idea what the next subject will be. A cat? A street scene? Making a purchase? Riding a train? The briefness of each segment, punctuated with a 1-second empty interval between each, leaves you wanting just a little bit more--yet also happily anticipating the next segment. Channel surfing ordinary life, if you will." ~Jeanine Anderson, Now Now Now

danielstrack(.com)
5.0 out of 5 stars endless entertainment!
Reviewed in the United States on December 12, 2012
These short, random video clips captured by Rob never get old. They cover the whole spectrum of emotions and it's like someone is providing you with a collection of daydreams. They can serve as background or foreground entertainment. I always think they would be great to play in a bar or at a party. They have a tendency to draw you in. Very easy to watch and full of inspiration.
Read more
One person found this helpful
Helpful
Comment Report abuse
See all reviews