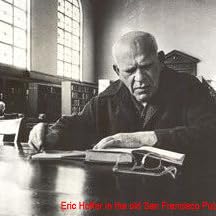 Eric Hoffer Biography Former migratory worker and longshoreman, Eric Hoffer burst on the scene in 1951 with his irreplaceable tome, The True Believer, and assured his place among the most important thinkers of the twentieth century. Nine books later, Hoffer remains a vital figure with his cogent insights to the nature of mass movements and the essence of humankind. Of his early life, Hoffer has written: “I had no schooling. I was practically blind up to the age of fifteen. When my eyesight came back, I was seized with an enormous hunger for the printed word. I read indiscriminately everything within reach—English and German. “When my father (a cabinetmaker) died, I realized that I would have to fend for myself. I knew several things: One, that I didn’t want to work in a factory; two, that I couldn’t stand being dependent on the good graces of a boss; three, that I was going to stay poor; four, that I had to get out of New York. Logic told me that California was the poor man’s country.” Through ten years as a migratory worker and as a gold-miner around Nevada City, Hoffer labored hard but continued to read and write during the years of the Great Depression. The Okies and the Arkies were the “new pioneers,” and Hoffer was one of them. He had library cards in a dozen towns along the railroad, and when he could afford it, he took a room near a library for concentrated thinking and writing. In 1943, Hoffer chose the longshoreman’s life and settled in California. Eventually, he worked three days each week and spent one day as “research professor” at the University of California in Berkeley. In 1964, he was the subject of twelve half-hour programs on national television. He was awarded the Presidential Medal of Freedom in 1983. "America meant freedom and what is freedom? To Hoffer it is the capacity to feel like oneself. He felt like Eric Hoffer; sometimes like Eric Hoffer, working man. It could be said, I believe, that he as the first important American writer, working class born, who remained working class-in his habits, associations, environment. I cannot think of another. Therefore, he was a national resource. The only one of its kind in the nation’s possession.” - Eric Sevareid, from his dedication speech to Eric Hoffer, San Francisco, CA, September 17, 1985

The True Believer: Thoughts on the Nature of Mass Movements (Perennial Classics)
1,649
Kindle Edition
$13.49
Back to top
Get to Know Us
Make Money with Us
Amazon Payment Products
Let Us Help You
English United States
© 1996-2023, Amazon.com, Inc. or its affiliates