It was never about a hotdog and a Coke Kindle Edition 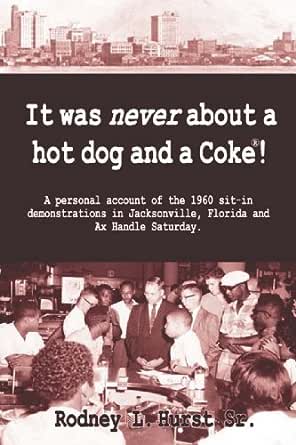 On Saturday, August 27, 1960, after one such sit-in, 16-year-old Hurst and his fellow demonstrators were greeted by 200 angry whites armed with ax handles and bats and beaten bloody. This event was underreported by the white-run Florida Times-Union, and in fact, received more thorough news coverage from papers outside of Jacksonville. Like Mr. Hurst, I am also from Jacksonville, and Ax Handle Saturday was not something they taught in sixth grade social studies over two decades after it happened. (In fact, I never knew such a thing had happened until I read this book the first time.)

The most important take-away from this account is that as Mr. Hurst says...the sit-ins and demonstrations in the fight against segregation and for equal rights were never about "a hot dog and a Coke." They were about human dignity and respect. As the old saying goes, if we don't learn from history, we are doomed to repeat it. And those of us who believe in peace, compassion, and equality for all must keep fighting the good fight together.

Fred
5.0 out of 5 stars Historical facts.
Reviewed in the United States on September 18, 2021
Verified Purchase
Exactly as it was at the time. I bought this for my grandchildren because I don’t want them to ever forget what happened at that time.thanks for sharing your thoughts and photos with all. 🙏🙌🇺🇸
Read more
Helpful
Report abuse

Peggy Longoria
5.0 out of 5 stars Very educational
Reviewed in the United States on July 30, 2020
Verified Purchase
Was kind of dry in that there were a lot of names. That said, it was very educational and should be read by everyone.
Read more
Helpful
Report abuse

DeBorah F. James
5.0 out of 5 stars Great Historical Read
Reviewed in the United States on September 2, 2017
Verified Purchase
Great Historical Read...The author is a classmate from High School...I witnessed the historical accounts that he wrote about as I was born and raised in Jacksonville, Florida. Very well written...Thanks Rodney for writing this book.
Read more
2 people found this helpful
Helpful
Report abuse

Alexis Roosa
1.0 out of 5 stars Pages falling out
Reviewed in the United States on March 2, 2021
Verified Purchase
I got this book for a school assignment, and the content itself is great but the book is falling apart. Almost every other page is falling out and it makes reading it very difficult when I’ve lost pages 2, 3, and 4 and I’m only on page 6.
Read more
Helpful
Report abuse
See all reviews
Back to top
Get to Know Us
Make Money with Us
Amazon Payment Products
Let Us Help You
EnglishChoose a language for shopping. United StatesChoose a country/region for shopping.
© 1996-2021, Amazon.com, Inc. or its affiliates