Anthony Burgess (25th February 1917-22nd November 1993) was one of the UK's leading academics and most respected literary figures. A prolific author, during his writing career Burgess found success as a novelist, critic, composer, playwright, screenwriter, travel writer, essayist, poet and librettist, as well as working as a translator, broadcaster, linguist and educationalist. His fiction also includes NOTHING LIKE THE SUN, a recreation of Shakespeare's love-life, but he is perhaps most famous for the complex and controversial novel A CLOCKWORK ORANGE, exploring the nature of evil. Born in Manchester, he spent time living in Southeast Asia, the USA and Mediterranean Europe as well as in England, until his death in 1993.
Read more 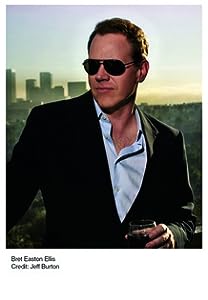 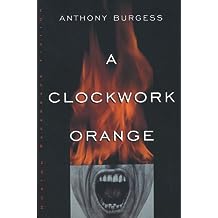 Great Music, it said, and Great Poetry would like quieten Modern Youth down and make Modern Youth more Civilized. Civilized my syphilised yarbles.

A vicious fifteen-year-old droog is the central character of this 1963 classic. In Anthony Burgess's nightmare vision of the future, where the criminals take over after dark, the story is told by the central character, Alex, who talks in a brutal invented slang that brilliantly renders his and his friends' social pathology. A Clockwork Orange is a frightening fable about good and evil, and the meaning of human freedom. When the state undertakes to reform Alex to "redeem" him, the novel asks, "At what cost?" This edition includes the controversial last chapter not published in the first edition and Burgess's introduction "A Clockwork Orange Resucked."
Read more
Other Formats: Kindle , Audible Audiobook , Hardcover , Paperback , Mass Market Paperback , Audio CD
#1 New Release 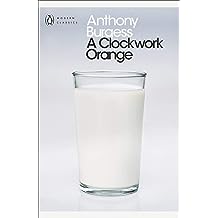 A Clockwork Orange (Penguin Modern Classics) Sep 24, 2020
by Anthony Burgess
$3.00
Product Description
In this nightmare vision of a not-too-distant future, fifteen-year-old Alex and his three friends rob, rape, torture and murder - for fun. Alex is jailed for his vicious crimes and the State undertakes to reform him - but how and at what cost?


About the Author
Anthony Burgess was born in Manchester in 1917 and educated at Xaverian College and Manchester University. He spent six years in the British Army before becoming a schoolmaster and colonial education officer in Malaya and Brunei. After the success of his Malayan Trilogy, he became a full-time writer in 1959. His books have been published all over the world, and they include The Complete Enderby, Nothing Like the Sun, Napoleon Symphony, Tremor of Intent, Earthly Powers and A Dead Man in Deptford. Anthony Burgess died in London in 1993. Andrew Biswell is the Professor of Modern Literature at Manchester Metropolitan University and the Director of the International Anthony Burgess Foundation. His publications include a biography, The Real Life of Anthony Burgess, which won the Portico Prize in 2006. He is currently editing the letters and short stories of Anthony Burgess.
Read more 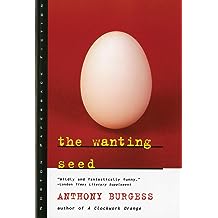 Set in the near future, The Wanting Seed is a Malthusian comedy about the strange world overpopulation will produce.

Tristram Foxe and his wife, Beatrice-Joanna, live in their skyscraper world where official family limitation glorifies homosexuality. Eventually, their world is transformed into a chaos of cannibalistic dining-clubs, fantastic fertility rituals, and wars without anger. It is a novel both extravagantly funny and grimly serious.
Read more
Other Formats: Hardcover , Paperback , Mass Market Paperback , Digital 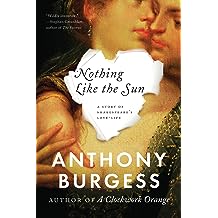 A magnificent, bawdy telling of Shakespeare’s love life, following young Will’s maturation into sex and writing. A playful romp, it is at the same time a serious look at the forces that midwife art, the effects of time and place, and the ordinariness that is found side by side with the extraordinariness of genius. 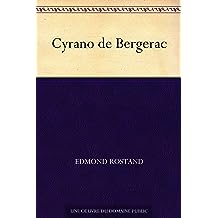 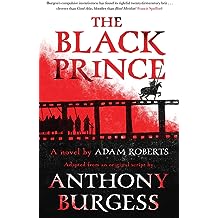 The Black Prince: Adapted from an original script by Anthony Burgess Oct 4, 2018
by Adam Roberts , Anthony Burgess
( 10 )
$4.31
‘I’m working on a novel intended to express the feel of England in Edward III’s time ... The fourteenth century of my novel will be mainly evoked in terms of smell and visceral feelings, and it will carry an undertone of general disgust rather than hey-nonny nostalgia’ – Anthony Burgess, 1973

The Black Prince is a brutal historical tale of chivalry, religious belief, obsession, siege and bloody warfare. From disorientating depictions of medieval battles to court intrigues and betrayals, the campaigns of Edward, the Black Prince, are brought to vivid life.

This rambunctious book, based on a completed screenplay by Anthony Burgess, showcases Adam Roberts in complete control of the novel as a way of making us look at history with fresh eyes, all while staying true to the linguistic pyrotechnics and narrative verve of Burgess’s best work.
Read more
Other Formats: Hardcover , Paperback 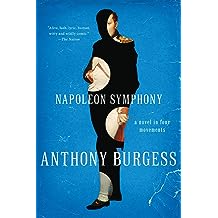 Anthony Burgess draws on his love of music and history in this novel he called “elephantine fun” to write.

A grand and affectionate tragicomic symphony to Napoleon Bonaparte that teases and reweaves Napoleon’s life into a pattern borrowed—in liberty, equality, and fraternity—from Beethoven’s Third “Eroica” Symphony, in this rich, exciting, bawdy, and funny novel Anthony Burgess has pulled out all the stops for a virtuoso performance that is literary, historical, and musical.
Read more
Other Formats: Hardcover , Paperback , Mass Market Paperback 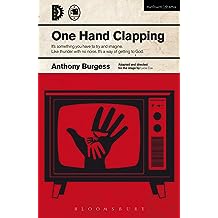 One Hand Clapping (Modern Plays) Apr 13, 2015
by Anthony Burgess
( 30 )
$9.99
Sometimes when I'm at work and waiting for customers I think about the two of us living like kings and not bothering about the future. Because there may not be any future to bother about, you know. Not for anybody, one of these days. And it's a wicked world.

Janet doesn't want their lives to change that much. She's quite happy working at the supermarket, cooking for her husband three times a day and watching quiz shows in the evening.

But once Howard unleashes his photographic brain on the world, the once modest used-car salesman can't seem to stop.

And what he sees as the logical conclusion to his success isn't something Janet can agree to.

Burgess's 1961 darkly comic satire of drab English consumerism is adapted for the stage by Lucia Cox. This edition was published to coincide with the US premiere at the Brits Off-Broadway Festival, at 59E59 Theatre, New York, in May 2015.
Read more
Other Formats: Hardcover , Paperback , Mass Market Paperback 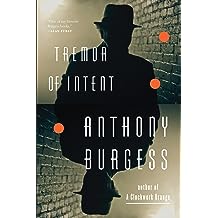 A brilliantly funny spy novel, this morality tale of a Secret Service gone mad features sex, gluttony, violence, and treachery. From the author of the ground-breaking A Clockwork Orange.

Denis Hillier is an aging British agent based in Yugoslavia. His old school friend Roper has defected to the USSR to become one of the evil empire's great scientific minds. Hillier must bring Roper back to England or risk losing his fat retirement bonus. As thoughtful as it is funny, this morality tale of a Secret Service gone mad features sex, gluttony, violence, treachery, and religion. Anthony Burgess's cast of astonishing characters includes Roper's German prostitute wife; Miss Devi and her Tamil love treatise; and the large Mr. Theodorescu, international secret monger and lascivious gourmand. A rare combination of the deadly serious and the absurd, the lofty and the lusty, Tremor of Intent will hold you in its thrall.
Read more
Other Formats: Paperback 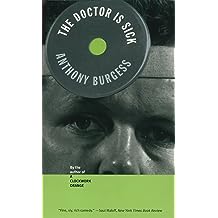 Dr. Edwin Spindrift, a very ordinary lecturer in linguistics, has been sent home from Burma with a brain tumor. Closer to words than people, his sense of reality is further altered by his condition. The night before he is to be operated on, Spindrift decides—shaven-headed, shirtless, and penniless—to postpone the surgery by escaping from the hospital. Things and people he hardly knew existed outside of his dictionaries swoop down on him as he careens through adventures in nighttime London. 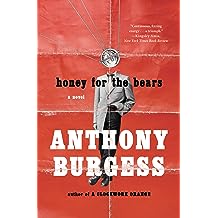 "There are so few genuinely entertaining novels around that we ought to cheer whenever one turns up. Continuous, fizzing energy…Honey for the Bears is a triumph." —Kingsley Amis, New York Times

A sharply written satire, Honey for the Bears sends an unassuming antiques dealer, Paul Hussey, to Russia to do one final deal on the black market as a favor for a dead friend's wife. Even on the ship's voyage across, the Russian sensibility begins to pervade: lots of secrets and lots of vodka. When his American wife is stricken by a painful rash and he is interrogated at his hotel by Soviet agents who know that he is trying to sell stylish synthetic dresses to the masses starved for fashion, his precarious inner balance is thrown off for good. More drink follows, discoveries of his wife's illicit affair with another woman, and his own submerged sexual feelings come breaking through the surface, bubbling up in Russian champagne and caviar. 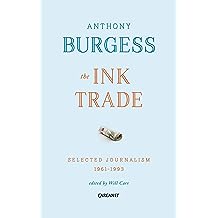 Despite his modest claims, Anthony Burgess was an enormously prolific journalist. During his life he published two substantial collections of journalism, Urgent Copy (1968) and Homage to Qwert Yuiop (1986); a posthumous collection of occasional essays, One Man's Chorus, was published in 1998. These collections are now out of print, and Burgess's journalism, a key part of his prodigious output, has fallen into neglect.

The Ink Trade is a brilliant new selection of his reviews and articles, some savage, some crucial in establishing new writers, new tastes and trends. Between 1959 and his death in 1993 Burgess contributed to newspapers and periodicals around the world: he was provocative, informative, entertaining, extravagant, and always readable.

Editor Will Carr presents a wealth of unpublished and uncollected material.
Read more
Other Formats: Paperback